skip to main content
Return to Fordham University
You are at:Home»Inside Fordham»Hippie Commune Tells a Story of Humans and Technology 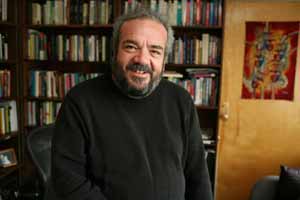 Tom McCourt, Ph.D., is preparing a film about Drop City, known as the first hippie commune.
Photo by Michael Dames

Tom McCourt, Ph.D., associate professor of communication and media studies, has a passion for discovering how people interact with technology.

For the last decade, he has investigated the intricacies of public radio and the recording industry. His current project, he said, is easily his most ambitious—a film about Drop City, an artist colony in southern Colorado that lasted from 1965 to 1973 and became known as the first rural hippie commune.

“This project is the most significant work that I can do as a cultural historian,” McCourt said. “I’ve been involved in it for over two decades, and I feel like it’s a contribution that I can make as a historian and also to do right by the founders.”

The documentary, which is still in production, grew from a friendship that McCourt struck up in the 1980s with Gene Bernofsky, one of the colony’s four founders.

Drop City, which took its name from the style of art created there, was distinct in its construction. The community’s originators employed the ideas of architect Buckminster Fuller and designer Steve Baer by using geometric panels fashioned from scrap metal to construct domes to house the residents.

Geodesic domes have always fascinated McCourt. Likewise, he was enamored by the story of the colony’s rise and fall.

“I was intrigued because the community was founded with very high ideals. But as is the case with all utopian experiments, it ended dismally,” he said. “This was a really amazing story that needs to be told, basically about the possibilities and perils of trying to create a new civilization.”

McCourt is collaborating on the project with Brooklyn filmmaker Joan Grossman, and is able to complete it because the bitterness among the founders is only now beginning to soften. Apart from the contradiction inherent in using junk to forge advanced architectural forms, the community represented a real paradox in its goals.

“Their whole point was to be creative people and work really hard, but not be employed, because they saw employment as a kind of wage slavery. So they had absolutely no resources whatsoever; they were dirt poor and they built everything out of garbage,” McCourt said. “They were involved in early experiments with solar heating. So the story of Drop City has a lot of interesting things to say about the potential for sustainability and do-it-yourself technology.”

The film is vastly different from McCourt’s previous output, the books Digital Music Wars: Ownership and Control of the Celestial Jukebox (Rowman and Littlefield, 2006) and Conflicting Communication Interests in America: The Case of National Public Radio (Praeger, 1999). Overall, he said, all of his projects speak to his fascination with how technology shapes public interaction.

“I’m interested in how disruptive technologies work, how established concerns try to deal with them and how technologies develop in ways that are never anticipated by their creators,” he said.

The breakdown of the traditional music distribution system formed the basis for Digital Music Wars. In it, McCourt laid out an unflinching assessment of how the recording industry missed opportunities to reinvent its business model. What happens in the music industry, he said, sets the template for how film and other media are distributed. If the response of major record labels to the success of file-sharing programs is any indication, the industry’s future does not look promising.

“File-sharing technology was very disruptive to record companies, because they don’t really create anything. What they do is promote and distribute,” he said. “So here was a new model, which would have served them very effectively, but they didn’t control it, so they tried to shut it down completely. It was a terrible business decision.”

Like the major Hollywood movie studios’ efforts to kill Sony’s Betamax video player in the 1970s, McCourt said the major record labels played the part of an industry too big and too old to change in the face of new technology.

“The record industry said that Napster was driving them out of business, that sales had nose-dived because people were sharing music and not buying it. But in 2000, when Napster was at its height, sales of CDs actually increased by 4 percent.

“The record industry said, ‘Hey, we’re losing money on this deal; we’re not selling CD singles.’ That’s what they used to couch their decline,” he said. “Then they quit making CD singles. So of course you’re not going to sell what you don’t make. In short, they were really creative with statistics.”

For now, McCourt is concentrating on the documentary as well as a long-term project to compile an encyclopedia of public broadcasting. He and Grossman are shopping their film to financiers, hoping to raise at least $150,000.

“We’re planning to do these interviews next summer, and just this weekend [Grossman] came up and said, ‘Regardless of having any funding, let’s do it,’” he said.