skip to main content
Return to Fordham University
You are at:Home»Inside Fordham»Helping Parishioners Find Strength in Time of Transition

A few years after becoming pastor of the Lutheran Parish of Southern Columbia County, N.Y., the Rev. Mark Frickey proposed a merger of its four small congregations, reasoning that one larger congregation would be more active and vibrant, and more likely to thrive. 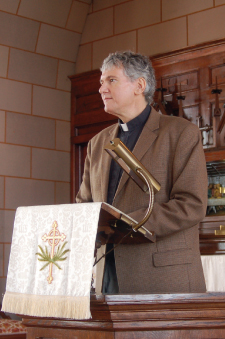 The Rev. Mark Frickey, GRE ’13, studied congregations in decline at the Graduate School of Religion and Religious Education.
Photo by Chris Quinby

He met strong resistance, however. People were deeply attached to their particular churches, some of which are among the oldest Lutheran churches in America, and all the memories associated with them. At the same time, it was undeniable that the congregations’ future was clouded. Membership was dwindling, in part because of more questioning of church doctrine among the young.

Frickey grappled with this dilemma while earning his doctor of ministry degree over the past six years at the Graduate School of Religion and Religious Education. He found some of the answers while writing his thesis, “Comprehending the Downward Slope: Congregations in Decline.”

“We need to understand how to walk with them and help them,” he said, referring to older, more traditional congregations whose members are unsettled by decreasing membership and changing attitudes toward the church.

“Somebody needs to be watching over these congregations,” he said. “It’s like a hospice care situation, almost. It’s tough work, but I think it’s much-needed work, so we just don’t discard these smaller congregations who don’t seem to be thriving anymore.”

“I see my work as helping to guide congregations through the decline,” rather than try to bring about radical changes that the congregations don’t want, he said.

The four churches in Frickey’s parish are located in the Hudson River Valley. Frickey, a Kansas native, fell in love with the area while interning in a nearby parish in preparation for ordination. He was named to his current position in 2000.

He estimated that the four congregations have 80 active parishioners among them, served by himself and an assistant. The oldest of the churches, Christ Lutheran Church in Germantown, was founded in 1710, and is one of the oldest functioning Lutheran churches in North America.

“We’re talking about generations of family history,” Frickey said.
As part of his doctoral studies at Fordham, he devised an approach that involves telling stories, airing the pain of seeing the church decline, and celebrating its centuries of good work. Also, he said, it’s important for parishioners to understand the reasons for the churches’ decline and not blame themselves for something that is being driven by cultural changes in society.

He noted some current trends that could reshape churches in the decades ahead: less doctrine, more conversation, more tolerance of ambiguity, and greater willingness to experiment with new forms of worship. Whatever happens, however, he sees his primary duty as shepherding his current congregations through changes that they find wrenching.

Things have changed, and unfortunately it is affecting who we are, but yet God can still use us to our very last day.”