skip to main content
Return to Fordham University
You are at:Home»Faculty Profiles»Helping Others to Help Others: Professor Researches Secondhand Trauma in Social Work 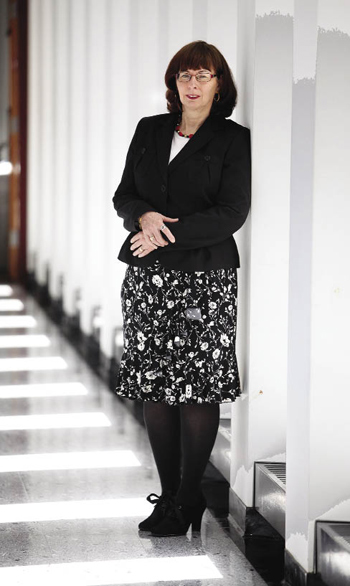 It is the job of the social worker to help people who have faced trauma or stressful life circumstances.
But whose job is it to help the social worker, who is exposed to trauma secondhand day in and day out?

The issue of how social workers cope with daily exposure to human suffering is a subject gaining more attention in the world of social work, said Maddy Cunningham, D.S.W., associate professor in the Graduate School of Social Service (GSS).

According to Cunningham, some social workers develop a response known as vicarious traumatization. Unlike burnout (often the result of bureaucratic factors) or countertransference (the experience of becoming emotionally entangled with one’s clients or patients), vicarious traumatization develops over time as a result of continuously hearing detailed accounts of horror or distress. It does not manifest to the degree suffered by the person who experienced the trauma firsthand, but rather presents subtly.

“Someone who is working with abused children might, for instance, start to question if their children are safe,” she said. “One might have a diminished view of humanity, or wonder if you can really trust people, since these [clients]were betrayed.”

Cunningham, who has published widely on the subject, became personally aware of the phenomenon while working with clients who had been sexually abused.

“I realized at some point that it was having an effect on me—that I was mourning the loss of the world the way I knew it, when I thought these things weren’t as prevalent as they are,” she said.

After two years of working in direct practice, she became a supervisor. In both roles, she noticed that other therapists had also been deeply affected by their clients’ stories.

“When you sit there day after day, and you listen to people talk about the terrible things they’ve experienced, [you might]question why there is so much suffering,” Cunningham said. “And very often, when people work with traumatized clients, they don’t even take a day off because they think, ‘How can I leave [those]who are suffering so much?’”

Having observed these realities after more than 10 years in direct practice, Cunningham now reaches out to GSS students to prepare them for the inevitable adversity they will face working daily with individuals and families in crisis. She hopes that by shedding light on vicarious traumatization, she can help students deal effectively and responsibly with their emotions.

“It’s an expected reaction that you need to address, one that comes about through a combination of feeling empathy towards the traumatized person, and also being exposed to the details of the trauma… It can interfere in the work and it’s also personally painful,” she said. “So [I try to help them] recognize what it’s called, and what they need to do… to normalize it, rather than see it as [a sign]that they shouldn’t do this kind of work.”

Cunningham also researches ways that people make meaning out of crises. One of these ways, she has noticed, is spirituality, which not only helps people move through the process of recovery, but also ultimately helps restore meaning.

Recently, she published a textbook on spirituality and clinical practice. Integrating Spirituality in Clinical Social Work Practice: Walking the Labyrinth (Pearson Education, Inc., 2012), is a comprehensive look at how social workers can effectively use spirituality to help clients who would be responsive to such an approach.

“I used the metaphor of walking a labyrinth to parallel both the clinical process and also the spirituality journey,” she said. “The decision to step over the threshold, and the [subsequent]walking toward the center, would be the engagement and assessment period, and the time in the center [of the labyrinth]would be the intervention. Ultimately, [the client]walks back out with the gifts or benefits from therapy, and implements them in their everyday lives.”

She brought the topics of spirituality and vicarious traumatization together during a pilot program in 2011 that was specially designed for clergy. Developed through GSS’s Office of Continuing Education, “Counseling Skills for Clergy” offered ministers six sessions on topics such as coping with the trauma and hardship they encounter while working with parishioners.

GSS is now looking to expand the course as a certificate program.

Cunningham has worked with the New York Police Department to run seminars for police officers who, like social workers and clergy, are at risk for vicarious traumatization.

“Part of this is about finding meaning and how you’re going to be able to continue doing [your work], which is related to how you ultimately find meaning in life,” she said.