skip to main content
Return to Fordham University
You are at:Home»Inside Fordham»Helped on His Law School Journey, Graduate Seeks to Give Back 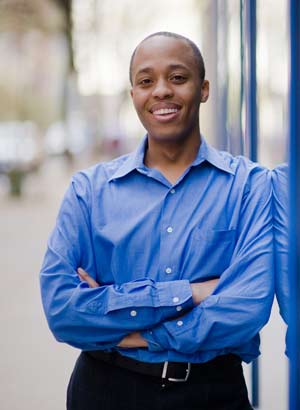 Alexander Jean benefited from the strong alumni network at the Law School.
Photo by Ryan Brenizer

Alexander Jean, LAW ’08, does not fit the mold of a typical attorney.

After graduating, Jean will eschew the world of high-priced litigation for a prosecutorial position in the office of Bronx district attorney Robert T. Johnson. Justice is one of Jean’s key concerns, and his new job will give him the chance to bring it to the underserved.

“I used to think that going into criminal law was going to be about heading into court and trying cases,” said Jean, a Harlem resident. “But I found it was more about doing justice and making sure you got the best outcome for all parties involved.”

The public service aspect of law was a guiding theme for Jean during his time at Fordham. In addition to internships with Johnson and Manhattan district attorney Robert Morgenthau, he volunteered in a soup kitchen through the Black Law Students Association and worked with a domestic violence awareness organization.

Most students are discouraged from focusing on anything but classwork when they start law school, but Jean said his work with domestic abuse victims taught him valuable lessons that guided his studies.

“I’m in these classes for hours on end so I’ll be able to go out there and have the tools to help someone else,” said Jean, who saw at the domestic violence center how his hard work at Fordham could benefit others.

His desire to help the less fortunate comes, at least in part, from what he said he owes to the people who have helped him throughout his life. From his childhood through law school, Jean said that many people were extremely gracious to him, offering him assistance and helping him escape poverty.

“If not for the opportunities I’ve had, I would probably end up there as well,” Jean said. “Because of the people who have helped me through the years I was able to make more of myself.”

He chose Fordham on the recommendation of a friend. Its New York City location, combined with its stellar reputation and strong alumni network, made Fordham the perfect fit.

Jean was touched particularly by the level of alumni involvement he found at the Law School, where graduates actively participate in the development of young attorneys. Jean already has played a mentoring role through the Black Law Students Association, helping first-year students cope with the stress that comes with adjusting to law school.

“I did what I could to make their first year as comfortable as possible,” he said. As an alumnus, he plans to do even more, to follow the example of the alumni who helped him.
“
Without the help of our alumni, we wouldn’t be able to be the trial attorneys we are striving to be. If not for them, I wouldn’t have really been as excited about the type of work I was going into,” Jean said. “They’re excited about Fordham; they’re excited about helping other students.”