skip to main content
Return to Fordham University
You are at:Home»Inside Fordham»Headline Forum Confronts ‘The Wall’ 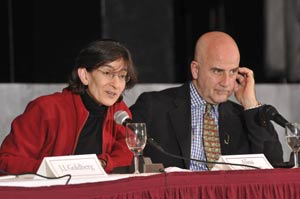 The role of the arts in furthering consideration of the Israeli-Palestinian conflict was the source of much heated discussion at a Fordham Center on Religion and Culture (CRC) Headline Forum on Tuesday, Feb. 26.

Four experts representing different perspectives—diplomat Alvaro De Soto, journalist J. J. Goldberg, academic Rashid Khalidi and arts critic Alisa Solomon—gathered to debate the topic, “The Wall on Stage—What Divides Israelis and Palestinians?” Co-sponsored by Fordham Theatre and the CRC, the forum considered the controversial production Twenty One Positions: A Cartographic Dream in the context of the struggle between the two peoples inhabiting the Holy Land.

A collaboration between playwrights Abdelfattah Abusrour, Lisa Schlesinger and Naomi Wallace,Twenty One Positions attempts to examine the conflict through the story of a man who returns to Bethlehem from Cincinnati to find his missing brother.

The discussion demonstrated that the wall in question—what Israel calls a “security fence” designed to deter Palestinian suicide attacks—is as much a state of mind as it is a physical barrier. The participants sparred over issues raised by the production, such as victimization, brutalization, dehumanization and legitimization.

Goldberg, editorial director of the Forward weekly newspaper, took offense to its portrayal of Israelis. While agreeing that theater brings a dimension of humanity to conflicts, he argued that this play did not accomplish that objective, as it humanized the Palestinian experience under occupation but dehumanized Israelis. The play, he said, presented Israelis as “cardboard stick figures” and “demonic machines in uniform (who) exist only to show the brutality of the Palestinian experience.”

“Each side has to understand the other side isn’t going away,” he said. “That requires humanization. The project here at Fordham University is not furthering that goal. I wish it was.”

That drew a response from Khalidi, the director of Columbia University’s Middle East Institute, who agreed that the play emphasized the Palestinian experience. Calling the production “innovative and exciting,” he lauded Fordham for mounting it.
“
One thing theater can do is to challenge entrenched assumptions,” he said.

Solomon, director of the arts and culture concentration at Columbia University’s Graduate School of Journalism, concurred. “The arts don’t demand balance,” she said. “The arts safely risk exposure to the things we don’t already believe.”

While the discussion began as a consideration of the arts as a vehicle for examining assumptions, it veered into a discussion of the conflict and its political implications.

The biggest sources of contention were Goldberg’s and Khalidi’s definitions of dehumanization and legitimacy. Khalidi asserted that U.S. administrations and the American media present Muslims, Arabs and Palestinians in a negative light, while Goldberg said that on American college campuses and all over Europe, Israel is no longer considered legitimate.

Still, each conceded that his side had obstacles to overcome. Khalidi said that Palestinians “do not speak with a unified national voice” and “must get their house in order.” Goldberg said that changing demographics, Israel’s increasing proportion of ultra-Orthodox Jews and the emigration of secular Jews all threaten the state with “implosion.”

As for the actual wall itself, Khalidi called it “collective punishment.” Goldberg argued that its construction stopped suicide attacks inside Israel.

The symposium ended with some discussion of what can be done. De Soto, a former United Nations undersecretary-general and special coordinator for the Mideast peace process, summed up the general spirit in saying that he was not optimistic about prospects for a two-state solution. He also raised the specter of demography, saying that the higher rate of Palestinian births could mean minority rule by Jews over Arabs in a few decades.