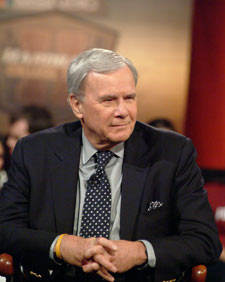 Tom Brokaw spoke on a number of issues, including elections, race, and international affairs, during his appearance on Hardball.
Photo by Chris Taggart

MSNBC Hardball College Tour was broadcast live in front of a wildly enthusiastic student audience from the Leonard Theatre at Fordham Preparatory School on Monday, Dec. 4. The show led with the war in Iraq: calling the Iraqi Study Group’s brief to develop viable options for the war in Iraq a “close to impossible job,” special guest Tom Brokaw said “the choices are not easy in Iraq, and the president has made it clear that he has his own continuing strong ideas about what he thinks ought to be done there. I don’t think the country should expect…a magic bullet.”

Campbell Brown, co-anchor of NBC’s Weekend Today, and NBC Nightly News correspondent, hosted the show in place of Chris Matthews, who was recovering from a sudden illness. Her interview with Brokaw, former NBC Nightly News anchor, ranged from the Iraq war and the recent poisoning of former KGB agent Alexander Litvinenko, to matters of race in the 2008 presidential election.

“Race is still a huge, defining issue in this country. It’s something I’ve spent most of my journalistic career trying to understand,” Brokaw said while discussing the prospects for Sen. Barak Obama in the 2008 presidential election. “Let’s be frank about it, this is a big reach, for an African American to be elected president of the United States. There are a lot of people, in their conscious or subconscious minds, who are going to have a hard time saying ‘I’m prepared to vote for a black person.’”

Students were able to question Brokaw on various topics during the show, and Brown quizzed seniors Emil Reyes and Chris Catropa about the thinking of college-age voters. 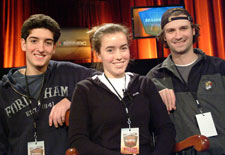 Catropa, a Fordham College at Rose Hill student and former vice president of the Fordham University College Republicans, said he saw “northeast Republicans” backing away from the ideology of neoconservatism, and embracing a more fiscal conservatism. Catropa, a political science major, will continue on in Fordham’s master’s program in elections and campaign management. 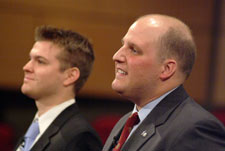 Tom Brokaw spoke on a number of issues, including elections, race, and international affairs, during his appearance on Hardball.
Photo by Chris Taggart

Ethics in government was the top concern among Democrats, according to Reyes, a College of Business Administration student and president of the Fordham College Democrats. According to him, college-age voters must work to change the ethical landscape if the United States is to maintain its influence in the world. Reyes plans to work in government upon graduation.

The show included energetic performances by the Fordham University band under the direction of Barry White, and by the cheerleading squad. Fordham students worked behind the scenes as well, as production assistants and runners for MSNBC.