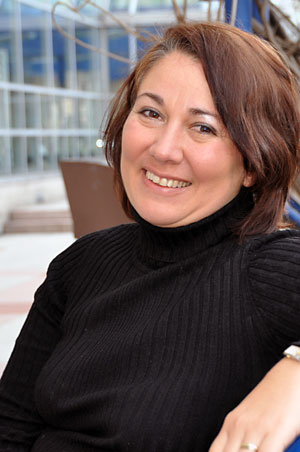 Born and raised in Europe, Marciana Popescu, Ph.D., associate professor of social work, has always had a more “macro” view of the profession, one that focuses on social development.

“For me, social work is international and social work means development,” said Popescu, a native of Romania. “However, when you say ‘social work’ in the United States, many people think of clinical practice, of therapy and direct intervention.”

To bring an international and human rights perspective to the teaching of social work, Popescu designed a course that would take students to different countries where they could apply the theories they learned in class. The course, “International Social Development and Community-Building in a Global Context,” has located its last few cohorts around the town of Barahona in the Dominican Republic. Inbateyes—communities established adjacent to sugar cane plantations for Haitian workers—they have encountered some of the Dominican Republic’s poorest Haitian refugees.

There, Fordham students in the Graduate School of Social Work (GSS) worked with Haitian communities generally and Haitian children specifically, focusing on literacy and access to education. This year, however, the class added an extra component to the trip—a four-day excursion into Haiti’s third-largest city, Jacmel, in the wake of the devastating earthquake.

“You can’t really learn about international development unless you do something that is related to global issues,” said Popescu, who traveled with 11 students to the Dominican Republic and Haiti from March 14 through 21. “This earthquake has made Haiti a global priority.”

Located on the southern coastline, Jacmel, a city of 35,000 known for its vibrant art scene, lost its city hall, 54 schools and some 1,800 homes to the earthquake. An additional 4,400 homes were partially destroyed, and more than 5,700 families were displaced to tent cities set up by NGOs and the Canadian government.

Popescu and her group spent two days in the Dominican Republic. There, they met with government officials who are responsible for designing the nation’s social policy platform and UNICEF representatives who were coordinating disaster-response efforts in Haiti. They also visited one bateyin the south of the country.

They then traveled into Haiti and stayed in tents on the beach, working with KONPAY, a grassroots organization focusing on youth development and community empowerment. Students learned about compost-making and dry toilets, and helped to develop long-term reconstruction plans rooted in microfinance. They also brought much-needed supplies: solar-powered flashlights, children’s medicine and 100 mosquito nets.

The importance of working with KONPAY was that it focuses on dignified relief and reconstruction efforts that empower Haitians to organize and provide for themselves, Popescu said. It gave Fordham students a chance to speak with Haitians to “learn from them what is needed.”

“What we know from other disasters is that, after a while, donor fatigue and development aid workers’ fatigue sets in, and the media finds other things to report on,” Popescu said. “While what is needed is a long-term reconstruction effort, I am afraid that Haiti may be forgotten very soon.

“This study tour can really document what is happening, to help Fordham’s students and community maintain awareness at a high level, and to find new ways in which we can be involved in working with these communities.”

Popescu and students got a chance to observe the Haiti/Dominican Republic border crossing process twice—in the back of a truck when they entered, and coming out on foot. Both times, said Popescu, there was no passport control.

“[This] means that the risk for human trafficking is very high,” she said.

One of the key ingredients of teaching social work, for Popescu, is to get students involved in grassroots sustainable programming on an international level. Sometimes, she said, larger NGOs lose sight of the sustainability issue when they begin disaster response, bringing in their own teams to build and organize reconstruction in the most effective and timely manner.

“It would take longer and be more complicated to involve the Haitians in the community,” Popescu said. “However, when we talk about sustainable development, you really need to have the communities leading the process, empowering the local people to do community reconstruction.”

For Popescu, the true legacy of social work in the United States evolves from advocacy work undertaken by social work pioneers such as Jane Addams, who won the Nobel Prize for her community-building and peace efforts.

That brand of social work, said Popescu, must not be “forgotten or lost” in the process of teaching tomorrow’s social work practitioners and in practicing social work.

“When you look at what social work education is all about, it is a systems approach,” Popescu said. “We look at the whole context of a particular issue—how all the different systems have been involved. We put the puzzle together from there.”

Popescu is determined that her students, however, will have received the necessary enrichment that will influence their practice in a human rights direction.

“In class they’ve learned how agencies come together, how governments play into development, and what the human rights issues are,” Popescu said. “During the study tour, they applied what they’d learned to a real situation.

“Now that they are back, they can integrate the theory and the practice, and strengthen their skills in international development and social work,” she said.