skip to main content
Return to Fordham University
You are at:Home»Inside Fordham»GSS Professor Reaches out to Tanzanian Grandparents

Life for grandparents in the village of Mbgala, Tanzania, can be wearying.

Besides dealing with poverty and failing health, many have lost their adult children to AIDS, becoming the sole caretakers of the orphans left behind. 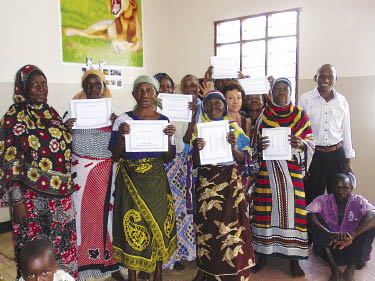 Carole Cox, Ph.D., works to empower grandparents who are the primary caregivers of their grandchildren.
Photo courtesy of Carole Cox

But in just over a year since Carole Cox, Ph.D., first traveled to Tanzania, life for grandmothers and grandfathers in Mbgala is already a little better.

Cox, a professor in the Graduate School of Social Service (GSS), has spent more than a decade running empowerment classes for grandparents who are the primary caregivers for their grandchildren. Since she began the classes in New York in 1998, the initiative has taken off, helping to strengthen the parenting skills of grandparents all over the country.

“It’s proliferated in many states,” said Cox, an expert in gerontology and social policy. “The curriculum was published a few years ago, and it won a leadership award from the National Association of State Agencies on Aging. So it’s really been publicized.”

In 2009, a documentary called “Grandmother to Grandmother: New York to Tanzania” connected some members of Cox’s empowerment classes with the women of Bibi-2-Bibi (Swahili for “Grandma-2-Grandma”), a nonprofit organization that supports African grandparents who are raising their grandchildren.

In March of 2011, Cox and Elizabeth Chesek, a GSS master’s student, traveled to Mbgala—a small, rural community near the Tanzanian capital—to meet the “bibis.” With the help of a translator, Cox and Chesek met daily with a dozen grandparents to discuss issues such as effectively communicating with children, dealing with behavioral issues, strengthening self-esteem, and helping children through grief.

“They all later talked to me about how much the communication had helped,” Cox said. “They hadn’t really understood the importance of giving children compliments, about sitting down and listening to children when they come home from school.”

The New York and Tanzanian grandmothers have many struggles in common, Cox said. All of them, after raising their own children, have to resume parental responsibilities. Many of them worry about what will happen to the youngsters after they die.

But there are major differences.

“The biggest difference between New York grandparents and those in Tanzania is the extreme poverty in Tanzania,” Cox said. “There are grandparents living on a dollar a day. There’s no welfare, no pensions, no Social Security—they have little to depend upon for support.”

In addition, some of the children are HIV-positive.

After the two-week venture was over, Cox left the empowerment curriculum in the hands of Fatuma Gwao, director of Bibi-2-Bibi, who continued meeting with the grandparents.

This July, one year later, Cox returned to Mbgala on a faculty development research grant to evaluate the classes. To Cox’s delight, not only have the grandparents continued using the empowerment lessons they’ve learned, but they have passed their new knowledge on to their neighbors.

Cox hopes to expand the empowerment program to other African countries where the AIDS epidemic has left millions of children orphaned.

“We need to worry about the next generation,” she said. “It really does take a village to raise a child—but that village needs support.”