Officially, it took Carol Ann “Cokey” Concannon three years to obtain her master’s in social work from the Graduate School of Social Service (GSS). Unofficially, the mother of 65 children already has more than a decade of training under her belt. 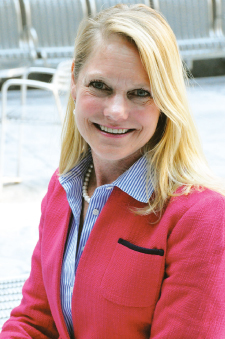 Carol Ann Concannon, who is graduating with a master’s in social work from the Graduate School of Social Service, has fostered 60 children in the last 14 years.
Photo by Tom Stoelker

Over the last 14 years, 60 foster children—many with severe medical problems and histories of abuse—have found refuge in the Concannon’s Connecticut home.

“It’s exhausting, but when you see some progress, it’s amazing. Then you start to feel that it was worth every bit of that effort,” said Concannon, who also has four biological children and one adopted daughter.

Concannon started her career in a consulting firm, but later stayed home to raise her four children. Then, when her youngest child was 7, she answered an ad seeking foster parents. Since then, she and her husband have fostered dozens of children—some for a day, others for years.

During this time, she also mentored other foster families through programs such as the Connecticut Association of Foster and Adoptive Families. Many confided in her that they are afraid to ask the state’s Department of Children and Families (DCF) for help with a difficult foster child for fear that DCF will remove the child from their home instead of providing support. Others find it so painful to give up their foster child that they leave the system entirely.

Never one to settle halfway, Concannon has appealed to DCF over the years about the unaddressed needs of foster families. But after 14 years of working on the ground, she decided to strive for change on a higher level.

“I was so frustrated with the system. But I knew if I wanted to complain about what was happening, I needed to know how the system functions. I figured the only way to do that was to go back to school and learn about it,” she said.

At GSS, where she has done a trauma-focused clinical concentration, Concannon has tackled these issues head-on. She recently spoke on a panel of foster parents and social workers at the Norwalk DCF office, emphasizing the need for therapeutic services for foster families.

“They’re losing a lot of their better foster families because these families are devastated when the kids leave,” she said. “DCF has asked you to incorporate these children as if they were now a member of your family, but how do you give up your child? We won’t retain good foster parents if there aren’t any services offered to families.”

She also argues that both foster families and social workers need specialized training in trauma, because all foster children suffer some sort of trauma, whether within their birth families or in the experience of being removed from their families and placed with strangers.

In April of 2012, Concannon and four members of the National Association of Social Workers met with Connecticut Gov. Dannel Malloy to advocate for a bill requiring all social workers to obtain bachelor’s or master’s degrees in social work before becoming state child care workers. The measure passed last November.

Concannon also enjoys working with older adults, having interned at a nursing home and rehabilitation center and worked with staff from Money Follows the Persons, a program that helps elderly individuals receive home services rather than move to institutions. Her numerous interests make deciding upon postgraduate work difficult; whether she ultimately works with older adults, foster children, or both, she said she considers her training at GSS invaluable.

“I’ve learned so much at Fordham,” she said. “It’s very hard when you have a child in your house and you’ve tried everything you know, but you’re still not making headway. So if nothing else, I feel I have a new skillset now.”