skip to main content
Return to Fordham University
You are at:Home»Inside Fordham»GSS Dean Focuses on Society’s Most Vulnerable 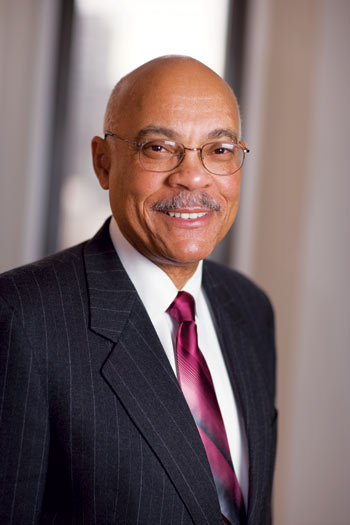 Peter B. Vaughan, Ph.D., says GSS is training students to adopt a global focus with an emphasis on human rights.
Photo by Jon Roemer

Peter B. Vaughan, Ph.D., says that he has been at the business of social work for “a lot of years.”

Now transitioning into his second decade as dean of the Graduate School of Social Service (GSS), Vaughan said he has never regretted his decision to leave the University of Pennsylvania—where he was both associate and acting dean in the School of Social Work—in favor of tackling the in-your-face energy of New York City.

Vaughan, whose career spans more than four decades, recently was named a “Social Work Pioneer” by the National Association of Social Workers—a distinction reserved for the nation’s most outstanding leaders in the field.

It is a distinction that both of Vaughan’s predecessors received: membership was bestowed upon James Dumpson, Ph.D., in 1993; and upon Mary Ann Quaranta, D.S.W., in 2005. In following Quaranta and Dumpson, Vaughan had big shoes to fill.

Under his leadership, GSS is ranked 18th in the nation by U.S. News & World Report and has garnered a reputation for graduating students with strong academic and practice experience.
In the last decade, GSS has brought in tens of millions in funding, recently averaging about $3 million annually in grants and contracts. GSS’ network of training programs, placement and research stretches far and wide, with the school working with municipal, state, regional and federal agencies.

Vaughan has journeyed through two American social upheavals, both of which helped shape his personal vision. In the early 1960s, while an undergraduate at Temple University, he became deeply committed to grassroots civil rights struggles and protests in Philadelphia. He served in Vietnam a few years later, first as the social worker in an infantry division and then as a clinical social worker in a mental hygiene detachment attached to an evacuation hospital. There, he counseled military personnel and conducted consultation with unit commanders.

Those experiences and others inspired Vaughan’s work on behalf of the most disenfranchised members of society. The task, he said, is well suited to Fordham’s Jesuit ideology.

“Fordham has always been a school that is true to its roots to serve poor and vulnerable populations,” Vaughan said. “We are not preparing private practitioners here at GSS. We don’t think about social work in that way; that’s not part of our mission.”

One focus of GSS, Vaughan said, is to educate a new generation of social workers to work with people from different backgrounds. With the rapid growth in immigrant communities, especially in New York City, social workers need to understand their clientele’s experiences and grasp the importance of a global and a human rights focus.

To those ends, he has initiated a global services specialization that helps GSS students prepare to work within immigrant communities, with international non-governmental organizations and on behalf of other underrepresented groups. The specialization includes a focus on human rights and social justice.

“Our global services specialization has really taken off,” Vaughan said. “It lends itself to a human rights curriculum. You can’t talk about human rights without looking at the issue all around the world.”

Another focus of GSS is to prepare social workers that represent New York City’s diverse communities. Vaughan estimated that close to 40 percent of GSS students were from homes where English was not the primary language.

“We stay active in encouraging new immigrant communities to develop their own professional cadre to care for their own, and to help teach others,” he said.

Emphasis is also placed, Vaughan said, on teaching students to evaluate the results of particular treatment types. This evidence-based approach is rooted in a medical model, said Vaughan, and is widely used in social work practice to focus more sharply on the needs and successful outcomes of particular cohorts. For example, a treatment that works for children in Groton, Conn., might not apply equally to those living in Bedford Stuyvesant, Brooklyn.

Vaughan earned his doctorate in social work and psychology from the University of Michigan and was an associate professor at Penn for two decades before becoming a dean. Although he admitted that he misses teaching, he has enjoyed his role in helping shape the direction and tone of GSS and its curriculum.

Today, GSS has concentrations in three areas: leadership and macro practice, research, and clinical practice. Vaughan is particularly proud that GSS is one of the few schools of social work that offers a research concentration for MSW students.

As one of a handful of Fordham deans, Vaughan sits on University search committees and leads initiatives; he and Michael Gillan, Ph.D., associate vice president of Fordham Westchester, are co-chairs of the FordhamVets Task Group. The group helps recruit veterans under the Post-9/11 Veterans Educational Assistance Act of 2008.

Vaughan’s goals for the new decade are threefold:

He wants to grow the GSS program at the Westchester campus.

Healso would like to find new funding opportunities for the school’s centers, including The Bertram Beck Institute on Religion and Poverty, the Ravazzin Center on Aging, and the Institute for Women and Girls.

Lastly, he wants to build scholarship opportunities to help attract students to a profession that he sees as being more in demand than ever.

“The Bush era [was]fueled by the notion that ‘volunteers’ could do more social service,” said Vaughan. “But volunteers aren’t professionals.”

Today, Vaughan said, even middle class Americans are finding themselves near poverty and in need of social services.

“What are the needs of our nation’s vulnerable and marginalized people, and what do they need to have some modicum of success in this society?” Vaughan asked. “At GSS, we are looking at those questions and making decisions about where we need to be headed to serve them.”