skip to main content
Return to Fordham University
You are at:Home»Inside Fordham»GSS Celebrates 90 Years of Service to the Field 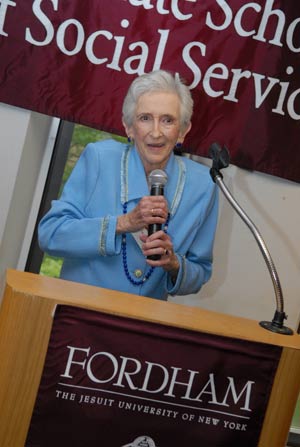 Fordham University’s Graduate School of Social Service (GSS), the largest in the country, celebrated its 90th anniversary on May 18 with a flurry of events that included a panel discussion on social justice issues, an alumni awards presentation and the honoring of two former deans.

The panel discussion at the Lincoln Center campus included six scholars, five of them Fordham faculty members, who discussed issues ranging from social indicators and poverty to society’s vulnerable populations—children, women and the elderly.

At a gala reception after the discussion, GSS feted Mary Anne Quaranta, D.S.W., who was dean of the school for 25 years, and James Dumpson, Ph.D., who served as dean from 1967 to 1976.

“I love this school and was pleased to be dean,” Quaranta said. “We had a wonderful faculty who managed to make us more visible, more respected, and I am proud of that. We elevated ourselves in the ranks of the schools of social work in this country.”

In addition, Peter B. Vaughan, Ph.D., dean of GSS, and Assistant Dean Susan Bair Egan, Ph.D. (GSS ’77, GSS ’04), were honored at a special alumni awards luncheon. Vaughan was presented the Mary Anne Quaranta Award for Outstanding Contributions to Children and Families for his academic service and his research on enhancing the lives of African-American boys. Egan, a founding member of the GSS Institute for Women and Girls, received the Ralph DeMayo Award.

GSS was founded in 1916 and is one of the nation’s oldest schools of social service, and with more than 1,400 students, it’s the largest in the country. It has more than 11,000 alumni throughout the world.

During the panel discussion, Barry Rock, D.S.W., associate professor of social work at Fordham, told the gathering of social service professionals and faculty members that two issues critical to the field of social work in the 21st century—social justice and service to vulnerable populations—are central to GSS and to the University’s mission,

“This is really a family event,” Rock said. “The University mission and the school’s mission are synchronized and we are proud of that.”

Panelist Gregory Acevedo, Ph.D., assistant professor of social work at Fordham, assessed the development of the profession over the past 90 years and said that social work has steadily grown stronger as a profession and has taken its full place in the academy.