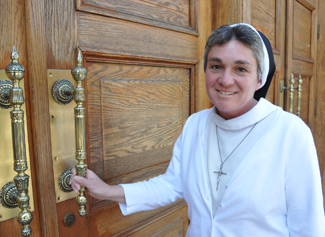 Maureen Flynn, A.S.C.J., found it enlightening to study with fellow students, most of whom also were working administrators.
Photo by Patrick Verel

It’s a long way from St. Louis to New York City, but the distance between a high school and grammar school is almost as great.

Three years ago, Maureen Flynn, A.S.C.J., left her post as assistant principal of Cor Jesu Academy, an all-girls high school in St. Louis, to become principal of Our Lady of Pompeii elementary school in Greenwich Village.

As Sister Flynn prepared for this new challenge, she decided it was time to strengthen her administrative skills.

She turned to the Graduate School of Education (GSE), where she earned a master’s degree in educational administration. Although she will be returning to secondary education next year as principal of her alma mater, Sacred Heart Academy in Hamden, Conn., Sister Flynn said her experiences at Our Lady of Pompeii and Fordham were invaluable.

Sister Flynn had earned a bachelor’s degree in math with a concentration in computer sciences at Albertus Magnus College and a master of arts from Webster University in St. Louis. Now, she wanted to get a better handle on current trends in education, and GSE’s curriculum offered her knowledge that could be applied immediately.

“The best thing was going to classes and then thinking about how to use that new information in my daily life,” she said. “It was really great, because I learned how to make my staff more effective and was able to implement those techniques immediately.”

Fordham was a good fit because of its Catholic focus, Sister Flynn said. Catholic schools such as Our Lady of Pompeii face different challenges than public schools, including issues such as tuition. She also found interacting with fellow students—most of whom also were working administrators—to be enlightening.

“It’s not just what’s being taught in the classroom. It’s also listening to the other students,” she said. “I feel bad, almost, that my master’s program is coming to an end because I’m going to lose that interaction.

“We benefit so much by listening to what other people say, especially other Catholic school educators,” Sister Flynn said. “How are they working through the money situation? How are they trying to attract more students to their school? You gain so much information just by listening to other students.”