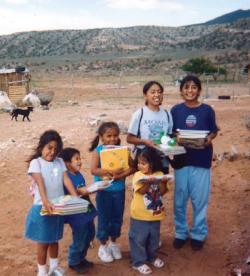 A new study by a Fordham professor highlights the special challenges facing American Indian schoolchildren, showing that they’re more likely to be disciplined than are their peers who come from other racial backgrounds.

Among other findings, the study found that American Indian students in Arizona were three times more likely than white students to be referred for disciplinary action; compared to Latino students, they were twice as likely. That’s according to a study by Carolyn Brown, Ph.D., associate professor in the Graduate School of Education, and Caterina Di Tillio, a GSE doctoral student and network leader for the New York City Department of Education.

The study—to be published in the Journal of Education and Learning—focused on Arizona because it had statewide data as well as significant numbers of American Indian students, Brown said. She analyzed incidents that took place in 116 school districts during the 2010-2011 school year.

The study generally found American Indian students’ rates of in- and out-of school suspension and expulsion were similar to those of African American students, who researchers have long known are disproportionately disciplined in school. Far less research has focused on discipline of American Indians, she said.

“I’ve always been kind of interested in how we treat kids who don’t quite fit in, for one reason or the other, and act out, and how we track that,” she said. American Indian children often feel disengaged and alienated in school because of cultural differences, and because of stories of cruelties inflicted on their forebears, she said. She noted the competitive nature of public schools, saying it clashes with American Indians’ cultural tendency to work in groups and try not to stand out.

“I have had American Indian parents tell me that they just saw no point in their kid being in school, because it meant nothing to them culturally,” Brown said.

Her broader interest is in finding out how principals react, and whether they intervene in classrooms, when confronted with data showing that certain students are being disproportionately referred for disciplinary action. She’s trying to follow up on the Arizona study, and hopes to pursue this research question at schools in Kentucky and West Virginia, where statewide data is also collected.

“That’s kind of what I’m interested in in the long run—if they’re forced to take a look at this data, does it make a difference in how they operate?”

She said that it’s easy for school officials to overlook that certain students are involved in a disproportionate number of incidents. Hard data, however, makes principals take notice.