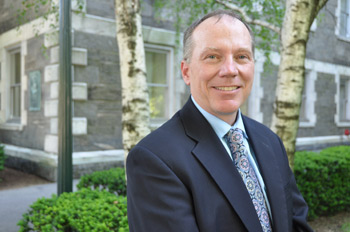 John Craven, Ph.D., advocates that children learn about science through real-time inquiry outside of the classroom.
Photo by Patrick Verel

Teachers have the capacity to make science meaningful to their students, but only if they get their students to see it as something intricately connected to everyday life, said John Craven, Ph.D., associate professor of education.

Craven is doing just that, through his work with science teachers in the Teach for America program and other new teachers at Fordham; his involvement in local schools; and his efforts to expand the Wildlife Conservation Society partnership program at the Bronx Zoo.

“My work involves looking at how teachers develop in their beginning years and helping them break from models of instruction that all too often don’t promote the type of learning that is called for in today’s complex world,” he said.

Craven is the key liaison between the Graduate School of Education (GSE) and the Bronx Zoo, where GSE students have been earning certification to teach biology in New York since 2007. As such, he is intimately familiar with the benefits that come from learning about science in an informal educational setting.

“In that science is, in part, an endeavor to generate explanations behind natural phenomena, then we must provide opportunities for students to explore those phenomena outside the classroom,” he said.

The partnership program at the Bronx Zoo and its vast array of resources certainly provides the teachers such opportunities. However, Craven said that teachers also can use real-world issues pressing society as the context for learning content. Locally relevant and globally important issues, such as gene patenting, waste management, bioengineering, alternative energy projects and brownfield remediation can serve as vehicles for exploring powerful ideas in science.

“Students should understand that the social, ethical and political issues associated with their discipline are extremely important,” he said.

“All too often, new science teachers don’t see their role as touching upon how social, political and economic issues are connected because they come from programs that are entrenched in the traditional ways of teaching science,” he said.

One staple of science education that needs reconsideration is the science fair, which Craven examined in “Rethinking Science Fairs,” a paper he co-wrote in 2008 with Tracy Hogan, Ph.D., a professor at Adelphi University. Often, the quality of science projects reflects parental involvement and access to resources more than a child’s ability to think scientifically.

What he and Hogan experienced at a local science fair exemplifies this premise.

“We asked a fifth grader about her project, and she was fumbling a little bit, and that’s when her dad came along. He proceeded to explain all about it, and how much interest he had in the topic—I think it involved greenhouse gases,” Craven said.

“The little girl drifted away and played with her friends. Then she came back and started fiddling with the project, and he said, ‘No, no, stop that, go away.’”

Craven said the anecdote shows that students face real gaps when it comes to resources and parental interest. Instead of pouring time and effort into science fair projects, he asked, why not get the kids outside, working locally on problems connected to the world around them?

Such an approach ties into another of Craven’s interests, which is teaching a subject through inquiry.

“I can teach kids photosynthesis, oxidation and reduction, and they might do well when I quiz them on those terms. But by and large, the subject matter won’t really hold meaning for them because of how they learned it,” he said.

“There is a greater chance to make meaning at an individual level when students collect data and work with others to make sense of odd or puzzling trends, or to generate some explanation of natural phenomena.”

Craven is currently investigating the effectiveness of progressions in school curricula. In contrast to the notion of a spiraled curriculum, in which students revisit certain ideas over and over again so that they are reinforced, progressions aim to prevent repetition between grade levels.

“A lot of my work is grounded in schools, so I work with science teachers at the elementary, middle and high school levels, serve as a content coach, and as a mentor to open a dialogue about the practice of science education,” he said.

“The effort is to get teachers to become turnkeys in their schools, so that when we talk about progressions or the purpose of science education or using inquiry in science education, that that dialogue becomes self-sustaining within the culture of school.”