skip to main content
Return to Fordham University
You are at:Home»Colleges and Schools»Graduate School of Education»GSE Joins Effort to Revamp Education Doctorate

A new initiative in the Graduate School of Education’s Division of Educational Leadership, Administration,
and Policy (ELAP) could bring extensive changes to one of the school’s doctoral programs. 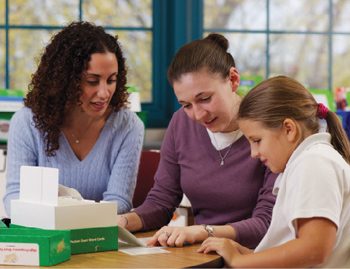 Plans for the Ed.D. program at GSE include making it more clinically rich, so that students can assist in the field.
Photo by Jon Roemer

In September, ELAP was accepted into the Carnegie Project on the Education Doctorate (CPED), a national effort to revamp the education doctorate, or Ed.D.

Launched in 2007, CPED comprises a consortium of colleges and universities working to update the degree to meet the current needs of school practitioners, clinical faculty, administrators and others who obtain the degree.

Traditionally, the Ed.D. has been regarded as a degree grounded in practical experience, while its counterpart, the doctorate of philosophy, or Ph.D., was research-based. But according to CPED’s administrators, it was feared that the Ed.D. had become too similar to the Ph.D.

“The Carnegie program was established because some thought there wasn’t enough rigor in the Ed.D.,” said Gerald Cattaro, Ed.D., chair of ELAP. “There were a lot of fly-by-night programs coming up, weekend programs, programs that take two to three years.”

When more than a dozen institutions of higher learning joined the first phase of CPED, bolstering the Ed.D. was at the forefront of the project. But as the group analyzed the issue more closely, a second problem surfaced: Though the Ed.D. and Ph.D. are theoretically distinct degrees, the practical difference between them often was unclear.

“How an Ed.D. is different from a Ph.D. is a fundamental question. Should they be different and, if so, to what degree?” said John Lee, Ed.D., vice chair of ELAP. “The people in the two programs have different goals and are in different places in their professional lives. So how do we make the degree more appropriate to their purposes and what they see as the reason for pursuing the doctoral degree? The Carnegie group started that conversation.”

In Fordham’s case, it was the ambiguity between the degrees that most concerned ELAP administrators.

“We had either surpassed, or were as rigorous as the others, in terms of the program, but… it mimics the Ph.D. program,” Cattaro said. “What we’re looking for is something that would be clinically rich, something like an M.D., that would involve a lot of practice.”

With this in mind, ELAP formed a team consisting of Cattaro, Lee—the former superintendent of Queens high schools, the largest school district in New York City—and Carlos McCray, Ed.D., an associate professor in ELAP who focuses on urban education. According to Cattaro, they will be able to apply their unique perspectives of the education system to serve as CPED representatives for ELAP, and vice versa.

During the first phase of the project, the CPED institutions drafted working principles that would better delineate the degree, including defining what it means to be a “scholarly practitioner” and to conduct a “dissertation in practice.” The second phase will pair newly participating institutions, such as Fordham, with first-phase participants that can serve as mentors.

“One of the things that being part of the CPED project is encouraging us to do is to have conversations, to take a look at our program and address how to move it to the next level to make sure it’s responsive to the needs of our students and the changing students that we’re getting,” Lee said.

CPED attended the fall convening at the University of Vermont, where it commissioned nearly 30 more colleges and universities. Cattaro, Lee and McCray next relayed CPED ideas to ELAP faculty during a full-day retreat in January. There, the group began to discuss its vision of the new Ed.D. at ELAP—a vision that will take Ed.D. students into the community.

“[We’ll] build more relationships in the community, form those partnerships where our students can be of assistance to schools out in the field,” McCray said. “As part of that practical base, our graduates and our students would be able to assist in some capacity, help these schools in the city solve some of the problems that they’re dealing with.”

The refurbished degree would also involve more programs geared toward students preparing to become administrators in higher education. In addition, Cattaro said, the degree would prepare students for the trend toward performance-based accountability in education, according to which the success of schools is judged by students’ test data.

Most importantly, though, the process of unfurling the new Ed.D. will allow ELAP to examine its effectiveness as a New York City program.

“One of the key things is that there is no particular model that the Carnegie project is looking to develop and promote,” Lee said. “Every institution is going to be unique because we all operate in a context; we have different students, we operate in a different locale. But what we can do is share ideas with each other and then adapt, modify, and create… That’s one of the strengthsof the program—the national dialogue.”