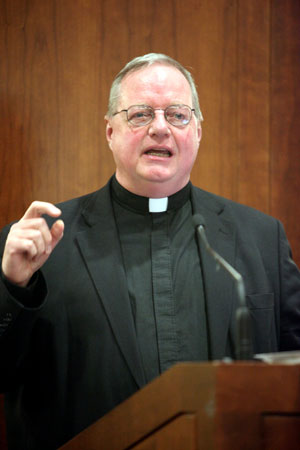 Catholic education exists to open the eyes of students to the sacredness of the physical world, according to Joseph O’Keefe, S.J.

“It does so in theology and catechesis and worship—in those explicitly religious dimensions of the schools with which we are involved,” he said on May 18 at the 16th annual Catholic School Executive Leadership Dinner at Fordham. The event, staged each spring by the Graduate School of Education, honors top Catholic school educators.

In his keynote speech on the Lincoln Center campus, Father O’Keefe extolled four aspects of the vocation of the priest that he said are central to the work of Catholic education.

He said the writings of Pierre Teilhard de Chardin, S.J., helped him see the holiness of education, the godliness of scholarship and the sacredness that is found throughout the physical world.

“Catholic schools teach us that holiness is to be found in the awesome complexity of the natural world, in the poetic word, with its power to transform, in the triumphs and tragedies of human history,” said Father O’Keefe, dean of the Lynch School of Education at Boston College.

Others who received the annual Catholic School Executives Award included: Father Michael Farano, vicar general of the Diocese of Albany; Monsignor John Graham, pastor of the Church of Saint Raymond in the Bronx; Monsignor Thomas Healy, pastor Our Lady of Sorrows Church in Corona, Queens; and Monsignor Brian McNamara, director of priest personnel in the Diocese of Rockville.

Joseph M. McShane, S.J., president of Fordham, praised the honorees for performing, through their work, an act of faith.

“Almost every kid who goes to a Catholic grammar school or high school or college will go through a period of functional atheism,” he said. “But you have to believe that what you do for them convinces them at a most important and intimate level that—at a formative time in their lives—the church loved them and cared for them. That will always remain with them.

The dinner was sponsored by the Graduate School of Education’s Center for Catholic School Leadership and Faith-Based Education.