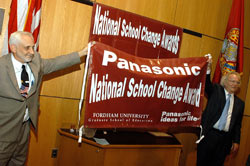 “You have taken teaching and learning to a new level in your communities, with good teaching and learning brought to scale—just what this country needs,” said Ray Simon, deputy secretary of the U.S. Department of Education, at the awards ceremony. “It is unfortunate that, for too many children, it is still luck of the draw whether or not they get a good teacher.”

The ceremony recognized the staff of exemplary schools in four states, including Anna F. Booth Elementary School in Irvington, Ala., where more than 70 percent of the students were left homeless by Hurricane Katrina.

Winning schools received a $5,000 grant, subsidized participation at the National Principals Leadership Institute at Fordham, and are invited to take part in a national research project on school change. The 2007 winners were chosen from a national pool of 127 schools—the largest number of applicants in the award’s eight-year history.