skip to main content
Return to Fordham University
You are at:Home»Inside Fordham»GSAS Students’ Journeys of the Mind Lead to the Heart 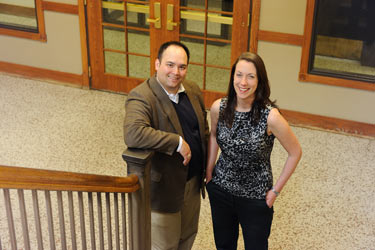 Philosophy and theology made a love connection in GSAS students Ashley Hall (left) and Anne Ozar.
Photo by Jim Fackler

“I came in without funding,” recalled Ozar, who earned her undergraduate degree from Loyola University Chicago, “so I worked in the study abroad office to get some money.”
Hall, who had come without funding from Houston’s University of St. Thomas, worked in the Graduate Student Association (GSA) and as Cardinal Dulles’ assistant for two years. Eventually he received a tuition break when he became GSA vice president.

The couple met when Ozar applied for a GSA position and Hall sat on the funding approval committee.

The two students became friends. Hall went to Germany on a fellowship to study 16th-century Lutheran reformer Philip Melanchthon. Ozar, who was in nearby Belgium, came to see him. They drove around in a tiny rental car for a week, living the joys and tribulations of cheap European travel, and got along well.

“Having her around didn’t annoy me at all,” he reflected, humorously.

That’s when Hall realized that, some day, he ought to find a woman just like her.

Back at Fordham, Ozar had begun to find her niche in philosophy, which had always been something of a family affair. Both of Ozar’s parents hold faculty positions in philosophy at her undergraduate alma mater.

“It’s weird,” she said. “We’re also a family of teachers.” (Her sister is a math instructor at Northeastern University.)

Ozar had chosen a dissertation thesis, “The Moral Significance of Sincerity,” analyzing just how synonymous the supposedly wholehearted emotive state is with truthfulness and morality.

“Throughout my graduate studies, I found myself interested in ethical questions surrounding trust and truthfulness in our interactions,” Ozar said. “Sincerity seemed curious because we take it to be moral, and synonymous with honesty. But a lot of the ways that we use sincerity seems to be quite different.”

She concluded that sincerity, grounded in emotion rather than fairness and objectivity, is often extended as an act of “self-presentation.”

When Hall returned from Germany, where he had been studying Melanchthon’s use of Greek patristic sources in theology and education, he had a moment of truth—and perhaps of sincerity. If he wanted a woman like Anne Ozar, why not date her?

“Luckily for me,” said Hall, “she had been thinking the same thing.”

In 2008, Hall lured Ozar to Central Park on the auspices of meeting friends. There, he proposed to her.

“I guess I figured she would know I was sincere,” he said.

Both Ozar and Hall said they were deeply grateful for the chance to serve on the GSA, and felt that GSAS is working hard to make graduate students’ experiences at Fordham better each year.

“It was a rough start, and each of us didn’t know if we’d be able to swing it. But it came into place,” Hall said.

Their wedding date is Aug. 1.

Since last year, Ozar has been working as an assistant professor of philosophy at Creighton University—a position for which she was hired even before she had defended her dissertation. She had high praise for the GSAS and, in particular, the Department of Philosophy’s emphasis on the history of philosophy. She is looking forward to the graduation ceremony—where she will be hooded by her mother, Lorraine A. Ozar, Ph.D. (GSAS ’74).

Hall has also been hired at Creighton; he will fill in for a theology faculty member on a sabbatical.

“Fordham served us both incredibly well,” said Ozar, who added that she values the undergraduate core and the social justice mission of Jesuit universities. “[We] wanted to continue on in a Jesuit institution.”

Hall said that their Fordham memories will always have special standing. “I came to get a doctorate in theology, and I got a wonderful wife in the process.”