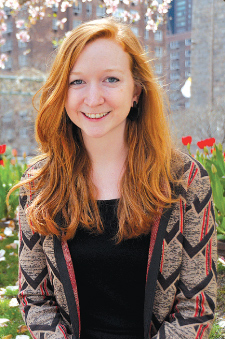 The empty Domino Sugar factory on Brooklyn’s waterfront is emblematic of the changing nature of New York City’s urban landscape, as community groups grapple with developers for control over the future of this prime real estate.

The tensions that arise as once-thriving industrial sites are slated for high-rise, and often high-priced, residential developments are well known to Graduate School of Arts and Sciences student Caitlin Waickman, FCRH ‘12, who is receiving her master’s in urban studies.

Waickman helped to document the history of, and proposed plans for, the Domino Sugar factory and other Brooklyn sites through collaborative research with other students. The project is now part of a website titled The Sixth Borough: Redefining Brooklyn’s Waterfront (http://thesixthborough.weebly.com/).

The project, part of a course given by Roger Panetta, Ph.D., visiting professor of history, has been a key experience of Waickman’s graduate career.

“Our research was changing week by week because [development]is all happening so fast,” she said. “We still get emails about it and it will continue to be up and running long past the class. That’s something that’s really exciting—that we’re already contributing unique research to the field and that it’s lasting.”

Waickman’s insights into the dynamics of the city inform her research on housing and tenants’ rights, the subjects of her master’s thesis about housing activism.

Based on her study of a rent strike in Sunset Park, Brooklyn, Waickman’s thesis examines the interactions of nonprofits, activist groups, and politicians in the housing movement, with the aim of determining how tenants can best achieve their goals.

“While everyone has the best intentions for the most part,” Waickman said, “when tenants want support … they need to be very aware of whom they partner with, and that they maintain their own voice within those movements.”

Now wrapping up her term as vice president of the Graduate Student Association, Waickman is well aware of the importance of working across group divides. To this end she helped organize Fordham’s first Graduate Student Conference on April 5, an event aimed at “making sure there is a place for graduate students to showcase their work and hear about the work across departments,” she said.

As a Trinity Financial Fellow, Waickman started her research into community group interaction as a Fordham undergraduate, studying the University Heights neighborhood of the Bronx. She chose to major in urban studies and Spanish language and literature.

Fordham has offered Waickman opportunities she couldn’t gain elsewhere, “especially starting off in the Bronx,” she said, “where so much is changing and it really is an exciting borough—especially for urban studies.”

A native of Cleveland, Waickman said she plans to stay in the city to continue working in tenants’ advocacy and affordable housing. “I’m excited to take all that I’ve learned and apply it in the city that I know a lot about,” she said.