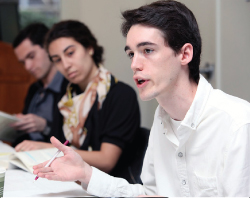 Jeffrey Lockhart, FCRH ’13, a GSAS master’s candidate in computer science with a concentration in data mining, is one of 40 students who have been selected from the United States to receive a full scholarship to Cambridge University in the United Kingdom to pursue graduate study. He expects to graduate from GSAS in May and begin at Cambridge the following September, where he will get his master’s in philosophy in Cambridge’s multidisciplinary gender study program.

Lockhart has been a National Merit Scholar and Fordham Presidential Scholar. He is a member of Phi Kappa Phi academic honor society and Sigma Xi scientific research society. In 2012, he was one of 75 undergraduates around the country who presented their research in Washington, D.C. at an annual event attracting the attention of Capitol Hill.

“Jeff is indeed a tribute to Jesuit education,” said John Ryle Kezel, Ph.D., director of the University’s St. Edmund Campion Institute for the Advancement of Intellectual Excellence. “He really makes one proud of the preparation our students get, especially from taking our core courses.”

Lockhart called himself fortunate to have many members of the Fordham community influencing and supporting his work—in particular his faculty mentors: Weiss; Orit Avishai, Ph.D., assistant professor of sociology; Patrick Hornbeck, Ph.D., chair and associate professor of theology; and Judith Green, Ph.D., professor of philosophy and co-director of women’s studies. He believed that his interdisciplinary background in gender studies and computer science was a big plus in his being awarded the scholarship.

One of the most prestigious international scholarships, the Gates Cambridge award was established in 2000 with a $210 million donation from the Bill and Melinda Gates Foundation. The scholarship goes to 90 students annually (40 U.S. students, 50 from other nations) and covers the full cost of studying at Cambridge. A defining characteristic of the Gates Cambridge scholarships is the commitment of scholars to work for the greater good.