skip to main content
Return to Fordham University
You are at:Home»Colleges and Schools»Graduate School of Religion and Religious Education»GRE Spreads the Word about Spirituality

Few would question the link between spirituality and Christianity—but what about the spirituality of business? 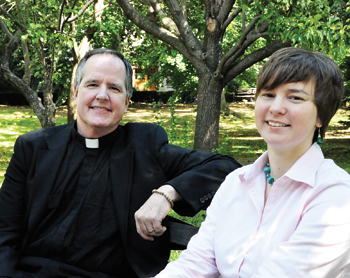 Francis McAloon, S.J., and Shannon McAlister, Ph.D., are helping deepen the study of spirituality at the Graduate School of Religion and Religious Education.
Photo by Joanna Klimaski

The two might seem at odds, but faculty and administrators at the Graduate School of Religion and Religious Education (GRE) believe that spirituality can play an important role in many fields of study.

“Spirituality is about learning how faith can concretely help your relationships become better and your life become better,” said C. Colt Anderson, Ph.D., dean of GRE. “Our focus on spirituality [at GRE]is to draw these horizons together so that people can understand the truth of the teachings in themselves, and how these principles are at play in the world.”

In its broadest sense, spirituality is the way in which one “lives out” a faith, Christian or otherwise. Spiritual practices often include religious activities such as praying and reading Scripture, but they also have practical secular components.

“Meditative practices, for example, allow you to get outside of situations to rejuvenate creativity and focus,” Dean Anderson said. “You can apply this to business, politics, communications—taking the time out for quiet contemplation, getting perspective on things.”

He cited, for example, corporate expert Jim Collins, author of Built to Last: Successful Habits of Visionary Companies (HarperCollins, 2011), who wrote about the “paradoxical blend” of humility (deferring personal needs for the greater good of the company) and ambition (the drive to help the company succeed) at work in the corporate world.

These traits, which Collins argues are requisite for corporate leaders, are also considered Christian virtues.

“Christian spirituality is consonant with leadership and management skills today,” Dean Anderson said. “Christian leaders also encourage channeling egoistic needs away from oneself to focus on the larger goal of building the Kingdom of Heaven—which is not a personal mission, it’s a larger mission… These leaders are humble, but they’re very ambitious.”

The study of spirituality has always been central at GRE—several master’s and doctoral programs, as well as a faith formation certificate, include concentrations in spirituality. Recently, though, GRE has taken steps to amplify the message.

This year, the school added two new professors of spirituality: Shannon McAlister, Ph.D., an expert in the history of feminine language for God, and Francis McAloon, S.J., former associate professor of Christian spirituality at the Jesuit School of Theology at Santa Clara University.

On Oct. 26, the pair will give a joint lecture, “New Directions in Spirituality,” at Fordham Westchester.

McAlister’s talk offers an innovative take on the Christian conception of God.

“There’s this concept of speaking about God as like a mother, and specifically conceiving and giving birth,” she said. “You find this in Scripture, and I argue that you find it in the theology behind the Nicene Creed.”

McAlister explained that the Latin rendition of the creed uses the word natus, meaning “born,” to describe Jesus as “born of the Father”—wording that evokes mother imagery. Incorporating such language could promote a more holistic spirituality and help women see themselves as “fully made in the image of God,” McAlister said.

Father McAloon will discuss discernment, a key element of Christian spirituality and, at its core, a decision-making process, by tracing the practice from the New Testament to Ignatian spirituality.

“Spiritual discernment means taking seriously that God has an intention or desire for each of us, and part of our spiritual journeys include discerning what God’s will is for us,” Father McAloon said. “I think it’s helpful to go back and look at the Pauline letters and other texts that support this idea that spiritual discernment is key to Christian discipleship.”

McAlister and Father McAloon said that spirituality is important for the religious and non-religious alike.

“Having a spirituality is constitutive of being a human person,” Father McAloon said. “It’s part of everybody, no matter whether you believe in a God or are an atheist. It’s part of what orients us beyond ourselves to some sense that there is more than just ‘me’ in this world.”

It’s a message that the GRE plans to take beyond the classroom by hosting public events such as the Westchester lectures, forging new connections, and more.

“My hope is that we’re going to take the discipline of spirituality and really show people how to carry it out into the broader world,” Dean Anderson said. “We will show that spirituality is relevant to professional as well as personal life; and we will be working with the other professional schools at Fordham, with nonprofits, and with businesses to show the practical value of spirituality.

“Because spiritual traditions could contribute to a more equitable and, indeed, even more profitable society.”