skip to main content
Return to Fordham University
You are at:Home»Colleges and Schools»Graduate School of Religion and Religious Education»GRE Honors Jesuit ‘Homeboy’

There are those of deep Christian faith who dedicate their lives to helping the poor, the powerless and the voiceless. 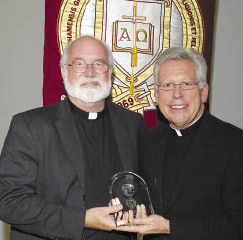 Then there is Gregory Boyle, S.J., who stands by society’s despised, readily thrown out and demonized—the criminals, gang members and drug lords.

At its Oct. 21 Sapientia et Doctrina celebration, the Graduate School of Religion and Religious Education (GRE) honored Father Boyle with a Gaudium et Spes award, given annually to a Catholic who contributes both to the religious community and the human community.

Father Boyle, known to his “homeboys” as Father Greg, has worked for 25 years in a Los Angeles barrio that has the city’s highest concentration of gang activity. To help stem violence and set gang members on a better course, Father Boyle founded Jobs for a Future in 1988 and Homeboy Industries in 1992, creating industries in which rival gang members worked side by side for an honest paycheck.

“I buried my first young person killed because of this (gang) sadness in 1988, and I buried my 178th on Wednesday (Oct. 19),” Father Boyle said. “I’ve seen a lot of horrible things in my life, and had to give [last]blessings.”

But his life with the gangs, Father Boyle said, has been his blessing from God. He told a story about “Bandit,” who, after years of selling crack on the streets, came to his office and said “I’m tired of being tired.” From an entry-level job, Bandit came to supervise a Homeboy warehouse, and bought a house, married and had kids.

Today, Homeboy Industries runs a bakery, a silkscreen factory, a solar panel training program, a diner and a café. The organization helps some 15,000 people per year find their worth beyond the dead end of street life.

“They’ve taught me everything of value, really,” said Father Boyle, author of Tattoos on the Heart: The Power of Boundless Compassion (Free Press, 2010). “In the last couple of years, they have even taught me how to text,” he said to laughter. “I’m grateful . . . it sure beats the heck out of actually talking to people.”

“Honest to God, they used to shoot bullets at each other, but now they shoot text messages. And there is a word for that, and that word is kinship.

“You don’t hold the bar and ask somebody to measure up. You just show up and hold the mirror and tell people the truth, knowing that your truth is my truth, and my truth is a gang member’s truth, and it all happens to be the same truth—that you are exactly what God had in mind when God made you.”