skip to main content
Return to Fordham University
You are at:Home»Inside Fordham»GRE Fetes NYPD Officer, Others as ‘Living Saints’ 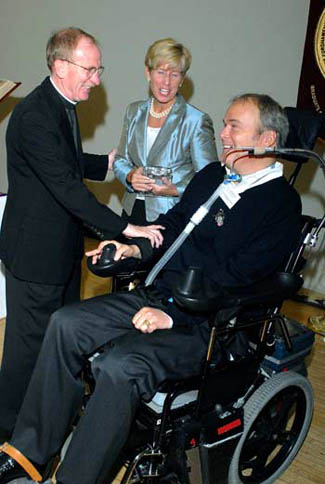 Fordham’s Graduate School of Religion and Religious Education (GRE) bestowed 11 awards on members of the Catholic community who exemplify outstanding service and spirit, at the third annual Sapientia et Doctrinacelebration on Nov. 1.

Among those feted were the Friars of Manhattan’s St. Francis of Assisi parish, businessman and philanthropist Carl C. Landegger, and retired New York City Detective Lt. Steven D. McDonald and his family.

McDonald, a third-generation police detective, was shot three times in the line of duty on July 12, 1986. His wounds left him paralyzed from the neck down. McDonald publicly forgave his teenage assailant in 1987, praying that the young man might find purpose in his life.

“It’s fairly easy to be ordinary,” said Michael Hayes (GRE ’05, FCRH ’92), who presided over the evening. “But while the people here tonight are probably too humble to tell you how hard it is to be saint-like, I think they’d all say without a doubt that they discovered just who they really are through the tough jobs they do each and every day with little thanks, but with such grace and fortitude.

“We honor them as living saints. They are simply people who live their lives as best they can and become all they can be, nothing more, but more importantly, nothing less.”

In a moving keynote speech, McDonald, a devout Roman Catholic, recalled two “personal spiritual faith moments” that helped him accept, acknowledge, forgive and persevere through his trying ordeal. McDonald described the sensation of being “touched by Jesus” when John Cardinal O’Connor laid the Eucharist on his forehead, as he lay wounded in his hospital bed.

“God gave me the gift of forgiving my assailant and I accepted it,” McDonald said. “Just as Cardinal O’Connor knew that the body of Christ would inspire me to live my life faithfully, Patty Ann knew that Conor would inspire me as well to my vocation as a father.

“I do not know if I could have accepted God’s gift had I not been given those two faith moments,” McDonald said.

Today, McDonald is a motivational speaker who shares his personal message of faith to help others choose nonviolence and forgiveness. He and his wife are co-authors of The Steven McDonald Story(Donald I. Fine, 1989), and son, Conor, attends college in Boston.

Landegger and his wife, Renee, established the Landegger Charitable Foundation in 1976 and have supported numerous educational programs around the globe, including Fordham’s 2008 conference “Co-Workers in the Vineyard of the Lord.” He is chairman of Landegger Industries and has been instrumental in improving the efficiency of paper recycling through technology.

The Ministry of the Franciscan Friars runs several self-help groups, a 24-hour confession, a residence for the mentally ill, an immigration center and a daily breadline at the Manhattan parish of St. Francis of Assisi on West 31st Street. Recently, the Friars designed and implemented their own Facebook page.

All of the awardees were chosen by a committee of GRE alumni, GRE Associate Dean Bert Binder and Rev. Anthony Ciorra, Ph.D., dean of GRE.
—Janet Sassi