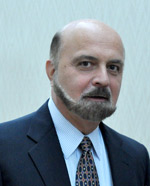 Michael Horan, Ph.D., wonders whether lay ecclesial ministers will be looked down upon by clergy or judged insufficient by other members of the laity.
Photo by by Janet Sassi

Fordham’s Graduate School of Religion and Religious Education (GRE) added to the growing dialogue surrounding lay ministry in the Catholic Church on Sept. 25, hosting its third conference on a landmark document, Co-Workers in the Vineyard of the Lord.

The document is the Conference of Catholic Bishops’ 2005 response to the rise in lay ecclesial ministers, or LEMs, accompanying the decline in church clergy. According to the National Catholic Reporter, by 2010 the active diocesan clergy in the United States will be less than the number of parishes, leaving lay ministers to fill the gap.

“Lay ecclesial ministry is the most significant thing to have happened in the Catholic Church in the last 1,000 years,” Anthony Ciorra, Ph.D., dean of GRE, told 200 scholars, clergy and parish professionals gathered on the Rose Hill campus. “It is the thing that dropped out of nowhere—nobody planned it, the bishops didn’t approve it. We woke up one day and realized we had 30,000 lay persons involved in ministry in the United States.”

“These leaders defy the usual categories for holiness and leadership, formerly requiring celibacy and ordination,” Horan said. “But will these lay professional ministers be accepted as credible by the people they seek to serve? Will they be regarded by clergy as peers or underlings, as co-workers or as migrant workers temporarily available for lots of work and easily sent on their way?”

Although the Co-Workers’ document offers “theological vision” in recognizing a growing lay ministry, Zeni Fox, Ph.D., professor of pastoral theology at Immaculate Conception Seminary, said it does not adequately address the question of who is a LEM.

Fox, who served as an adviser to the bishops’ subcommittee on lay ministry as it developed Co-Workers, said that the bishops in each diocese decide who, and who is not, a LEM. Therefore, there is widespread confusion and no official “vocation” for a LEM, leading to problems of adequate training, pay, hierarchal placement and performance management.