skip to main content
Return to Fordham University
You are at:Home»Inside Fordham»Graduate Finds Passion Through a Global Education 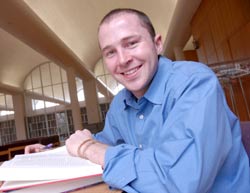 It hit him last summer. In a dry and dusty refugee camp near the border between Burma and Thailand, more than 7,000 miles from the Rose Hill campus, Prescott Loveland paused to reflect on how far his Fordham education had taken him.

“I had just finished playing soccer with a group of young Burmese refugees, and I was planning the next day’s English lesson for the novice Buddhist monks [living in the camp],” he recalled. “All I could think about was how far I had come since I was a senior in high school, when college to me was primarily a stepping stone to financial success.

“Fordham showed me the world and changed me,” he said. “I now have a new definition of happiness: engaging in the world constructively.”

Loveland, a passionate advocate for HIV/AIDS research and education, spent six weeks in Thailand last summer studying Buddhist responses to the epidemic, as the recipient of a Tobin Travel Research Fellowship and a Matteo Ricci Fellowship from Fordham. It wasn’t Loveland’s first foray into the subject. In 2005, he took a comparative look at HIV/AIDS and public policy in the United States and the United Kingdom. And earlier that year, he participated in a Fordham Global Outreach trip to South Africa. When he returned from South Africa, he worked to raise awareness on campus, co-founding the Student Global AIDS Campaign at Fordham and serving as its first president. All of these experiences gave Loveland the confidence to learn about an unfamiliar religion, and try to understand the complex ways in which HIV/AIDS affects another culture.

“It was the most humbling thing I’ve ever done,” said Loveland, who graduates from Fordham College at Rose Hill this spring with a B.A. in American studies, a minor in philosophy and a concentration in American Catholic studies. “But at the same time it was the most memorable and intellectually challenging experience of my life.”

It also helped him land a job. Last fall, Loveland attended a reception at Duane Library for students concentrating in American Catholic studies, where he met Steven DiSalvo, Ph.D. (FCRH ’84, GBA ’90, GSE ’04), who serves on the advisory board for the University’s Curran Center for American Catholic Studies. DiSalvo, a managing director at Archimede Philanthropy Partners—a company that helps individuals, families and foundations make the most of their philanthropic efforts—was immediately impressed. Loveland was equally inspired by DiSalvo’s work, and he joined Archimede as an intern last fall. This spring, he accepted an offer to work there full time after graduation. But not before he returns to South Africa.

In late May and June, Loveland will lead a Fordham Global Outreach team to South Africa, where he and 10 other students and recent graduates will split their time between Pretoria and Cape Town. When he returns, he plans to apply for a Fulbright Fellowship to Kenya.

Through his work in Thailand, South Africa and the Bronx, Loveland said, he has found “a sense of hope and beauty, a commond thread of compassion in people and human interaction that’s spiritually refreshing.” And he is looking forward to beginning work at Archimede in August.

“It’s a perfect match,” he said. “I’ve found a base to make change in the world.”

Ryan Stellabotte is the editor of FORDHAM magazine.