skip to main content
Return to Fordham University
You are at:Home»Inside Fordham»Geraldine Ferraro, 1935-2011 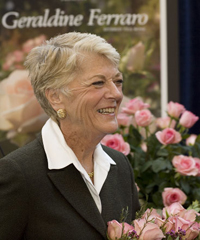 Fordham University mourns the loss of Geraldine Ferraro, LAW ’60, a longtime member of the U.S. House of Representatives and the first female vice presidential candidate for a national American political party. Ferraro died on Saturday, March 26, from multiple myeloma, a type of cancer with which she was diagnosed in 1998. She was 75.

“We are deeply saddened by the loss of Geraldine Ferraro,” said Joseph M. McShane, S.J., president of Fordham University. “Though her accomplishments were many and varied, she was so much more to the Fordham family: a warm friend, a fierce defender and a proud alumna. Today we mourn with her family and loved ones, and hold them in our hearts and prayers.”

Ferraro, who will be inducted posthumously into the Fordham Hall of Honor at a ceremony in June, was one of only two women in a class of 179 to graduate from Fordham Law School in 1960. She attended classes at night while teaching elementary school in Astoria, Queens.

She parlayed a career in the Queens County District Attorney’s office into one in politics, representing New York’s 9th Congressional District from 1979 to 1985. She was chosen by Democratic presidential candidate Walter Mondale to be his running mate in 1984, an election that incumbent president Ronald Reagan won by a landslide.

Ferraro campaigned for a New York Senate seat in 1992 and 1998, and most recently served as a United States Ambassador to the United Nations Commission on Human Rights from 1993 to 1996. She served in the 2008 presidential campaign of then Senator Hillary Rodham Clinton, and in her long career has also been a political analyst for Fox News, a columnist, for The New York Times syndicate  and co-host of CNN’s Crossfire.

Ferraro was honored at a ceremony at Fordham Law in 2007, with a commemorative rose, the sales of which went toward the Multiple Myeloma Research Foundation. Geraldine Ferraro roses can be found today in flowerbeds at the Rose Hill and Lincoln Center campuses.

In a citation that will be read at the Hall of Honor ceremony, Ferraro will be lauded, as—paraphrasing Shakespeare—“a gentlewoman of brave mettle,” a fierce defender of women’s rights and a resolute, astute politician.

“Geraldine Ferraro was quite simply one of the most distinguished alumni of Fordham Law School,” said Michael M. Martin, interim dean of Fordham Law School. “A graduate of the Evening Program at Fordham Law, she built a remarkable and pathbreaking career in service to her state and nation. She also was unfailing in her commitment and loyalty to our school, assisting in many ways over the years, including her invaluable support for our Stein Center on Law and Ethics and Feerick Center for Social Justice. We extend our condolences to her family, and we join them in mourning her passing.”

Ferraro is survived by her husband, John Zaccaro, and her children Donna, John Jr. and Laura