skip to main content
Return to Fordham University
You are at:Home»Inside Fordham»Gabelli Students Face Off in Battle of the Pitches 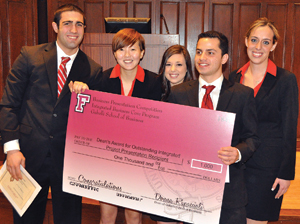 Can Safeway supermarkets survive an increasing pinch from Whole Foods above and Wal-Mart below? What does Green Mountain Coffee, whose ownership of the lucrative Keurig machine patent is expiring, need to do to stay competitive? And how will athletic clothing firm Under Armour play with big boys like Nike and Adidas?

On March 5, six teams of sophomores from the Gabelli School of Business answered these questions as they faced off with each other in the school’s third annual “Core Bowl” championship.

With three corporate executives sitting in the front row of Keating First Auditorium and hundreds of fellow students filling in the rest of the room, team members took turns handing a microphone off to one another. Speaking without notes, they paused periodically to refer to PowerPoint slides of their plans that were flashing on the screen above.

How, Cotlear wondered, did the Safeway team that wanted to hire a celebrity chef to promote its new stores know he would cost $1 million? (They called his agent.) Why did the team that wanted Safeway to embrace Truly Natural, a series of smaller, fresh-produce-oriented stores, think it could draw customers in “food deserts”? (Their plans factored in surveys of neighborhoods.)

From concept to implementation, no detail too small was left unaddressed. To the team that suggested Green Mountain Coffee sell Keurig cups of Green Mountain coffee for 40 cents from a food truck, to show just how economical the machines are, Ben Cole, Ph.D., assistant professor of management systems, wondered where the students anticipated getting all the water to make the coffee. (They’d budgeted for a truck with a water tank.)

Core Bowl organizer Kimberley LaMarque Orman, a clinical assistant professor in the Schools of Business, noted that the goal of the competition was to teach students both the fundamentals of business strategy and public speaking.

As such, after the presentations, all participants were invited, for the first time, to vote online for the best speaker. Tension was palpable when the judges’ votes were finally tallied, and when “Safeway RTA” was announced the winner, members let out a loud cheer and embraced each other in a huddle. One of the team members, David Lasco, also took home the best speaker prize.

Regardless of who won, said Donna Rapaccioli, Ph.D., dean of the Gabelli school, the exercise would benefit all the students involved.

“This allows students a platform where they can analyze and share their solution to a business problem,” she said.

“It also allows them to be innovative and teaches them to work on their feet and work in a team. These are all things that you need when you join the work force.”