skip to main content
Return to Fordham University
You are at:Home»Commencement»Gabelli School of Business Students Prepare to Take On the World

The world is becoming increasingly global—and so are the students at the Gabelli School of Business.

Two of this year’s graduates—Andrew Santis, who is receiving a bachelor’s of science in marketing with a concentration in global business, and Stephanie Ballantyne, who graduates with a dual master’s degree in public accounting and taxation—have worked, lived, and studied in more than a dozen countries between the two of them.

Stephanie Ballantyne is graduating with dual master’s degrees in accounting and taxation.
Photo by Joanna Mercuri

To Ballantyne, the global bent at the Gabelli School felt like home. Born in Germany and raised in Switzerland, she completed her undergraduate degree in accounting finance at the University of Stirling in Scotland, and then worked for Deloitte Zurich before coming to Fordham.

The move was challenging, she said; but then, having attended an international high school and traveled as a student to the likes of Egypt, Russia, and Greece, the challenge was a familiar one.

“I’ve always had culture shock happening at some point or another, but I grew up knowing I’d have an international lifestyle,” said Ballantyne, whose credits include president of the Gabelli School’s Accounting and Tax Society and chief operating officer of the Finance Society.

“I like New York,” she said. “Switzerland is a bit more laid back—they start work earlier, but also leave earlier, and on the weekends their phones are turned off. For someone starting their career, it can seem a bit slow.”

The New York pace has suited Ballantyne. She interned at Deloitte in Manhattan last summer, and by August she had secured a full-time offer.

“It was a big change, coming here—especially because I started at Fordham in 2014 during the polar vortex. There were about two snow days per week, which made it hard to meet people,” she said. “But overall, Fordham was definitely the right choice.” 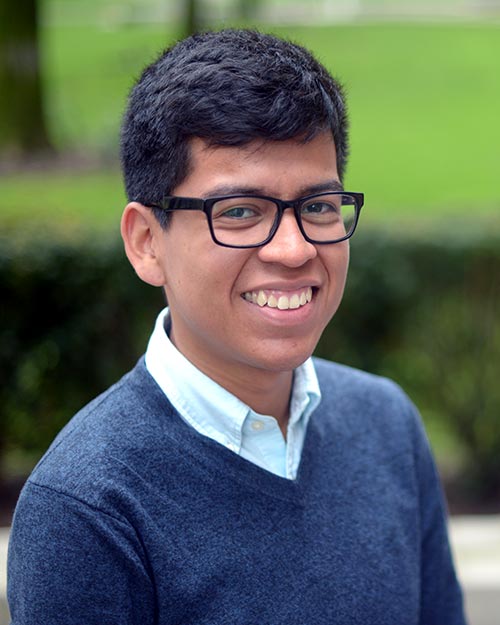 Andrew Santis is graduating with a bachelor’s of science in marketing and a concentration in global business.
Photo by Joanna Mercuri

For Santis, a native New Yorker, it was a study tour to Spain during his junior year that sparked his passion for global business—but his real adventure began when he returned home to his internship at Cardwell Beach, a digital marketing agency.

“My boss knew how much I enjoyed Madrid, and in March he called and said they wanted to offer me compensation for my work, which would be to send me abroad to work for the summer,” he said. “It didn’t even have to be Spain—I could choose any country I wanted.”

His options boundless, Santis chose a multi-city tour of Europe. He began with a week in Paris, and then joined up with fellow Gabelli School students for a summer semester program at Fordham’s London Centre. After London, he continued on to Germany, where he spent a week each in Frankfurt, Cologne, Hamburg, Berlin, and Munich.

In the mornings Santis explored the city, and in the afternoons, once his New York colleagues were at the office, he worked on creating buyer personas for Cardwell Beach.

“It was definitely a test of strength and character,” Santis said. “I learned a lot about myself by venturing out to another part of the world on my own.”

Both Santis and Ballantyne have jobs lined up following graduation. Ballantyne will continue with Deloitte in Manhattan, and Santis will take a full-time position at Cardwell Beach (a position for which he will craft his own title and job description).

“Fordham prepared me well,” Ballantyne said. “All the opportunities are here—you just have to take the initiative to go get them.”