Moving to the Bronx (population 1.4 million) from Carlow, Ireland (population 23,030) required a few adjustments for Ryan Dillon-Curran, a marketing major at the Gabelli School of Business. 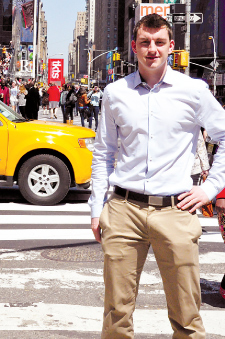 Ryan Dillon-Curran’s soccer career took him from a tiny town in Ireland to the heights of Madison Avenue.
Photo by Chaewon Seo

For starters, Dillon-Curran, who completed his studies in December but will graduate this month, had to relearn how to walk. An aspiring soccer player, he’d been taking a year off after high school to try to make it as a center back on a professional team when his tibia was broken in half by a rough tackle during a game.

“I was playing a different kind of soccer,” he said. “American players are generally more physically fit than Irish players, who tend to be more technical. I was also playing on turf field. I’m more used to playing on mucky grass fields in Carlow, so that took me a while to get used to.”

The Bronx wasn’t a completely foreign land to him, though. Growing up in Ireland, he was a huge fan of “Streets of New York,” a song by the Wolfe Tones, which references “Nelly’s beside Fordham Road,” an Irish pub that once graced the neighborhood.

Dillon-Curran has thrived both at Gabelli and on the Fordham soccer team, where he served as captain during his senior year. His fondest memory is beating Temple University in overtime last November in the final game of the regular season to win the Atlantic 10 regular season championship.

A close second is his experience working at advertising giant BBDO, where he was hired in January as an assistant account executive and is currently working on an account for Lowe’s Home Improvement.

Last year at a Fordham Athletics-sponsored networking event that was sparsely attended because of a raging rainstorm, he met Paul Reilly, FCRH ’80, an EVP senior account director at BBDO. The two hit it off, and when Dillon-Curran followed up with him later, he landed an interview for a competitive summer internship.

“The next day I got a call and they said ‘Can you work this spring?’”

After the internship, Dillon-Curran stayed on with BBDO, taking a break last fall to play his final season of college soccer. The company hired him full-time in January and will be sponsoring him for a work visa so he can stay in the United States.

He credits Linda Luca, Ph.D., an adjunct professor of advertising at Fordham and a former managing director at the firm McCann Erickson, with inspiring him to get into the advertising field.

“Even outside of class, I could reach out to her. Like ‘Hey, I’ve got an interview with BBDO coming up,’ and she’d say ‘You should talk about this, make sure you know XYZ, and if this doesn’t work, here are some other contacts you could talk to.’ Her class was really great because it was very hands-on,” he said.

And of course, Dillon-Curran said he owes a debt of gratitude to men’s soccer coach Jim McElderry, who gave him a second chance to play the sport that he loves.

“The Fordham community has been so great to me since I’ve been here. Everyone has affected me in some way positively,” he said.