skip to main content
Return to Fordham University
You are at:Home»Inside Fordham»Gabelli Grad Has a Serious Headstart on Business 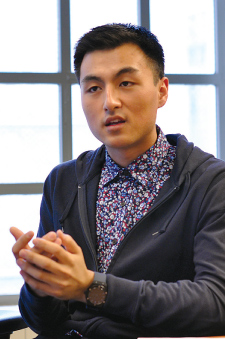 Andrew Kang has had a knack for business since middle school.
Photo by Patrick Verel
VIDEO: Fordham Selfies
Watch a short video selfie by Andrew Kang at http://bit.ly/FordhamSelfies5.

When a representative of Tesla Motors visited the Rose Hill campus last October to speak to a business class and offer free trips around campus in a model car, Andrew Kang knew what he had to do.

While his classmates were riding around campus in a black Tesla S60kw sedan, Kang ran back to his off-campus apartment and retrieved a copy of his résumé, making it back before the demonstration was over.

A month later, he was hired as a part-time product specialist. With a foot in the door, he has already lined up an interview next month for a position at the Tesla corporate headquarters in Palo Alto, California.

“It’s rewarding to know that that a little initiative taken in the spur of the moment can actually prove to be successful,” he said.

Kang is graduating from the Gabelli School of Business after having spent five years as an undergraduate at Fordham; in his junior year, he took a hiatus to move to Charleston, South Carolina, and help launch the website electronicdancemusic.com. He sold his share of the company to his co-founder after returning to Fordham a year later. He remains very proud of the site, which in a single year went from attracting 2,000 unique visitors a month to drawing a monthly average of 150,000 to 200,000.

“Something we started from scratch grew into something that was respected as one of the leaders of media coverage in the dance music industry,” he said.

Business has always come naturally to Kang. In middle school, he swapped out the standard cases of Nextel phones with custom cases and sold them in school, in what he figures was his first foray into business.

Growing up in the suburbs of Eastchester, New York, and Old Tappan, New Jersey, Kang, a child of first-generation South Korean immigrants, said he always felt drawn to New York City. Coming to Fordham enabled him to immerse himself completely in the Big Apple. He majored in marketing because he likes the creative aspect of business.

“The beautiful thing about marketing is you’re able to understand why people act a certain way,” he said. “There’s a psychology factor. Marketing lets you tap into the behaviors of people instead of just working numbers.”

After taking a few months after graduation to travel, Kang hopes to start his post-Fordham career at Tesla. But he still loves being in the heart of it all. Recently, he interned at MTV in Times Square, where he’d visited as a tourist many times during his formative years.

“To this day, when I leave my internship, I walk out of Viacom’s headquarters and think ‘Wow, this is a touristy area. Everyone is here to see this, and will probably not see it again for a long time, but I get to see this every day,’” he said.

“Even when you have to weave your way thorugh tourists while trying to get to work, it’s exhilarating to be here. It’s hard to describe that feeling.”