In his first presentation for the school that now bears his name, Mario Gabelli (GSB ’65) delivered sobering words and visions of hope to roughly 400 Fordham business students.

The Bronx-born entrepreneur, who gave $25 million to the University in September to help globalize the undergraduate business program, told students on Dec. 1 that the United States may be on an extended economic slide. 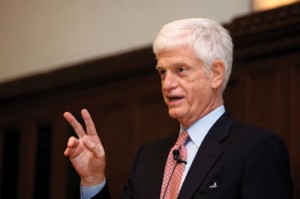 Today, he said, the United States owns about 25 percent of the world’s gross domestic product of $65 trillion, a portion that is likely to shrink.

“We are terrific at making goods and we sell the world annually $1.2 trillion,” Gabelli said. “But we are buying $1.8 trillion.”

Between trade deficits and IOUs to other nations, he said, the U.S. will lose its competitive edge as its economic power diminishes.

Yet this is precisely the time, he said, for young American entrepreneurs to strike.
Financial markets, he said, operate in cycles. In a PowerPoint presentation, Gabelli showed yearbook photos of Google founders Sergey Brin, Larry Page and Eric Schmidt; Facebook founder Mark Zuckerburg; and other successful young business leaders.

“Ten years ago, 120 months ago, they were one of you,” he told the students. “When things look bleak, there is great opportunity. One of you will be the next president of a university; one of you will own a football team or a piece of Madison Square Garden. You are the next generation of leaders.

“When everyone is looking for what can go wrong, think about what can go right and how you can change the world,” he continued. “If anybody says you can’t do it, think about Serge or Larry or the other creative individuals who once were sitting where you are today.”

As someone who bought his first stock when he was 13 years old, Gabelli recounted his lifelong passion for his work. What he does as chairman and CEO of GAMCO Investors Inc., his $30 billion investment company, he said, is “not very complicated.” His success as a value investor, he said, is based on meticulous research—reading annual reports, gathering and interpreting data—to find companies with high cash flow and lower market value.

He said he also looks for catalysts that inspire capital growth.

What will be the next catalyst, he asked? “Will it be in the digital world? Or starting a new exchange in Abu Dhabi? Or buying real estate in the Bronx?

“The good news for everyone here is that change, as part of the capitalist system, is going to work because it creates an opportunity for you to do something,” he said.

Gabelli’s gift is the largest ever made to Fordham, which renamed its undergraduate business college the Gabelli School of Business (GSB) in his honor. When asked why he decided to give so generously, he said it was partly to support what he loved best about America.

“What has made us a terrific society is the rule of law, the free market system and meritocracy,” Gabelli said. “The underpinning of meritocracy is education. Education requires facilities, faculty and a great student body—and that requires scholarships.”

He said that his wife, Regina Pitaro (FCRH ’76), and Donna Rapaccioli, Ph.D., dean of the Gabelli School, share his vision and passion for building a school that produces tomorrow’s global business experts.

“Together, we believe that this University is going to have one of the best business schools in the country, and that this is the time to do it,” he said.

The benefactor, alumnus and world-class businessman received a standing ovation.

Proving that only a superstar can follow a legend, Gabelli arranged for a live ram mascot to be on campus earlier that day as a treat for the University community. The ram was stationed outside of the McGinley Center during the afternoon with a professional animal handler.

“We are truly delighted that our school bears his name,” Rapaccioli said, “and we like the ram, too.”