skip to main content
Return to Fordham University
You are at:Home»Inside Fordham»Fulbright Combines Professional Opportunity with a Personal Journey 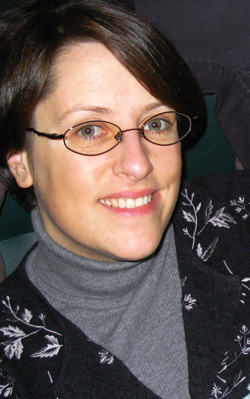 It was serendipitous that, five years ago, Elisabeth Frost, Ph.D., found herself in Wroclaw, Poland—a city a few kilometers from the village of her mother’s birth.

The associate professor of English had joined her husband on his short-term teaching assignment largely because she wanted the chance to experience culture abroad.

But the deep family connection that Frost felt when she set foot on the soil where her mother was born stayed with her.

This academic year, Frost has returned to Wroclaw on a Fulbright Teaching Fellowship at the University of Wroclaw’s Institute of English Philology. She is the recipient of a faculty Fulbright this year, and is teaching contemporary American feminist poetry and courses in poetics to advanced undergraduate and graduate students who are bilingual, speaking Polish and English.

“My students just blew me away with how fluent they are,” said Frost, director of Fordham’s Poets Out Loud for the past 10 years before her leave. “But teaching them is also an interesting study in perspective.”

She referred to the fact that, in Poland, “literary studies” also refers to the study of linguistics; the quasi-scientific study of language usage, syntax and grammar. While her students are language-fluent, said Frost, their literary breadth and theoretic depth are less extensive than those of literary studies majors in the United States.

Bringing feminist literature to a cohort that is familiar with Jean Paul Sartre but has never heard of Simone de Beauvoir is a challenge that Frost said she is enjoying. She has the opportunity to expose students to names such as Anne Sexton and Adrienne Rich, while they, in turn, enlighten her on the real-world pragmatics of university life in western Europe.

“In many ways, these students have more difficult situations than elsewhere that I’ve taught, and that includes a lack of resources,” said Frost. “Bear in mind that it’s only 20 years since the fall of communism. There isn’t a multi-generational sense of collecting Western-based texts. They’re expensive to obtain here, and most students don’t have the money to buy them.”

Because many of her students must get academic materials from reserve reading rooms, Frost wants to hold a book drive, with the help of colleagues back at Fordham, sometime before she returns.

Wroclaw may be lacking in some resources, but there is certainly no shortage of colorful history and Old World ambience, said Frost. The city was formerly the German city of Breslau, and was the last stronghold of the Third Reich in its battle against the Russian army. When the city fell in May 1945, Frost said, much of the German population was killed or fled, and much of the city’s historical records were destroyed.

Among the German residents of the Breslau region were Frost’s grandparents, Ernst and Margaret von Selle, and their two young daughters. Von Selle, a director of a local spa in the nearby village of Bad Salzbrunn, lived there until his death in the 1930s. Mrs. Von Selle took her children and moved to Berlin in the years leading up to the Second World War before escaping to the United States.

Frost has located the spa at which her grandfather worked, but she has yet to find his grave.

“I have a photograph of his grave that my grandmother gave me,” said Frost. “I’ve begun to look for the places where it might be. But it is difficult because so much was destroyed. When the Polish refugees moved into the city, there was a great deal of rage against Germany. So their first priority was not preserving German history.”

Even so, Frost hopes that some of her students may be able to help sift through records at the spa for some bit of history she could bring home.

At the time, Frost was caring for her mother and keeping a diary of her decline, “writing in a deeply necessary and very basic way to record what was happening to my mother, because it was very painful.” Frost said she applied for her Fulbright as a “trial run,” doubting she would receive it and knowing that, even if she did, she wouldn’t be able to go.

When she was notified a few months after her mother’s death that she’d been accepted, Frost saw the chance not only to live and teach in Europe, but to explore the family roots and to write about her mother’s life from fresh perspectives and in new ways.

The author of a critical study and a forthcoming volume of poetry, as well as co-editor of a major anthology, Frost has her sights set this time on a memoir-style book.

“It’s very complicated for me emotionally because I couldn’t be here now if my mother hadn’t died,” Frost said. “I hope to write a dual story which is about my mother’s life and also about my desire to know her better.

“In the last years of her life, I was able to do that in an intimate way that was a privilege,” Frost said. “I am still trying to know the woman who came from here, long before I was born.”
Frost will return to teaching at Fordham in September.