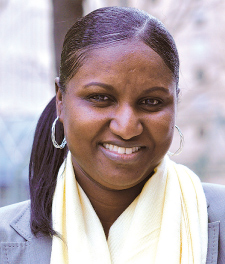 Hawa Jalloh has dreamed of pursuing an education since she was a child. As a young girl growing up in Sierra Leone in the 1970s, however, that dream seemed impossible to realize.

As she is about to complete her master’s of social work at Fordham’s Graduate School of Social Service, Jalloh recalls that, in her home country, she was not able to start primary school until the age of 9 years.

“I remember my father saying, ‘Why would you want to have all that education, when the kitchen is your office?’” Jalloh said, recalling her father’s strong cultural adherence to a woman’s traditional role.

Her dream, however, came with a determination she developed at a young age and which has proven invaluable as she has overcome obstacles along the way.

“If you have a goal, you can use any experience, good or bad, to reach it,” she said. “I did not let [disease or disabilities]stop me. I have pursued my calling.”

Jalloh moved to New York alone in 1996 with the goal of enrolling in college. She realized, however, she needed to work first to establish herself. Since 2002, Jalloh has worked at St. John’s Riverside Hospital in Yonkers, New York, where she has progressed from an addiction counselor to her current role as a clinical supervisor.

Ten years after arriving in the United States, Jalloh also began studying at Westchester Community College. Eventually she enrolled at Fordham for both her bachelor’s and master’s of social work. Although it has taken some time to complete her education, she has accomplished all of it while working full time and raising her 9-year-old son, Mohamadou, who was diagnosed at birth with Down syndrome.

Jalloh works tirelessly not only as her son’s parent but also as his advocate. As a health care professional, she has a leg up in advocating for other families with children diagnosed with Down syndrome. She said her son is her primary motivator as she finishes up her degree.

“He is my number one source of strength that keeps me going. When I have a long day at work or a stressful day at school, once I get home and see his face, everything is gone,” she said.

Mohamadou is also a powerful reason for Jalloh to fight for her own health. In the spring of 2013, Jalloh was diagnosed with a sarcoma, one form of cancer. She graduated with her bachelor’s of social work in May, had surgery to treat the cancer in June, and returned to school in September of that same year to begin her graduate coursework.

“If my son can survive everything he went through, cancer is nothing for me. That’s how I look at it,” she said.

When she walks across the stage to receive her diploma this month, eight years after beginning college, Jalloh will be celebrating a significant milestone in her education. But it is by no means the end of the journey. She plans to pursue a doctorate, and she dreams of becoming a teacher at the university level.

“If I can make a positive impact on a student and teach the right way of doing something, and if that student can impact 10 or even 100 people, then I will have achieved my goal.”