skip to main content
Return to Fordham University
You are at:Home»Inside Fordham»Francis Xavier Spreads the Society of Jesus Eastward 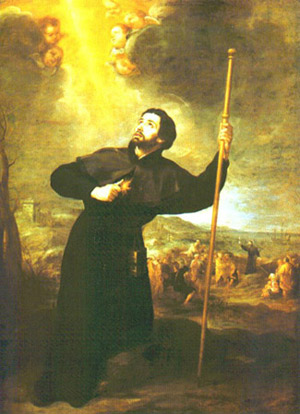 In March 1540, the same year that the Society of Jesus was established formally, a founding member began a perilous journey that presaged the Society’s extensive foreign missions. When asked by King John III of Portugal to help spread Catholicism throughout the Portuguese empire, St. Ignatius Loyola—founder of the Jesuits—turned to Francis Xavier, who readily agreed to go.

Xavier set out for Lisbon in March. In April, he set sail for the Indies, beginning a trip that would carry him to the doorstep of imperial China. When he died in 1552 on an island off the Chinese coast, he had established Jesuit outposts in modern-day India, Malaysia, Indonesia, Japan, and the port of Hormuz in the Persian Gulf. His many achievements abroad—such as translating his message into Japanese and other foreign languages—ignited new passion among Jesuits for carrying their ministry across the globe.