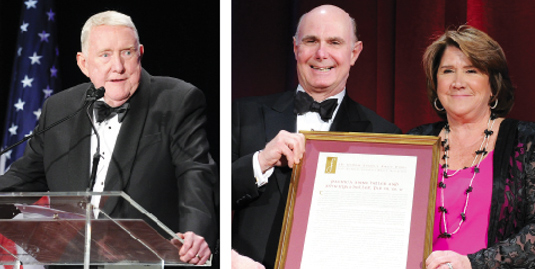 The 12th annual Fordham Founder’s Award Dinner celebrated the theme of transformation, honoring both the University community and the city in which it thrives.

In addition, the annual gala raised $2 million this year toward the Fordham Founder’s Presidential Scholarship Fund.

“Being in New York City has facilitated my involvement in community outreach, volunteering as a mentor in the Bronx, working as a tutor, and participating in scientific research at the Albert Einstein School of Medicine,” said scholarship recipient Courtney Markes, a Fordham College at Rose Hill senior who is a pre-med student majoring in Latin American and Latino studies. “It has helped us all to know there was someone else who believed we all have the potential to be great, and that all we needed was the means to fully realize this promise.

“Each one of you took a chance on us,” Markes told the attendees, adding that there were no words to communicate how grateful the students are for their support. 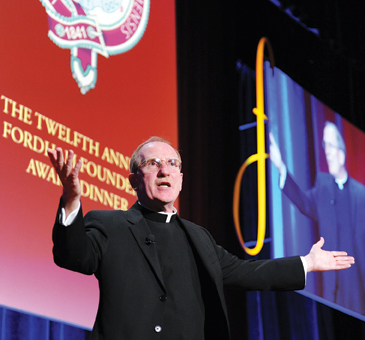 The night began with an invocation by the Most Rev. Frank J. Caggiano, auxiliary bishop and vicar general of the Diocese of Brooklyn, and ended on a note of gratitute from Joseph M. McShane, S.J., president of Fordham, in honor of the newest Founders and the new Jesuit pope, Pope Francis.

In between, attendees were treated to student testimonials and an elegant rendition of “New York, New York” by Fordham’s a cappella group, the Ramblers, among other highlights.
Upon receiving the Founder’s Award, E. Gerald Corrigan said he was deeply honored and “humbled” to have his name closely associated with Fordham.

“There is something very special about Fordham that distinguishes it from other great centers of learning,” he said. “That distinction is best-captured by the Fordham brand, namely the ‘Jesuit University of New York.’”

“Those six words celebrate the common bond between this great city and this great university.”

One of the University’s most ardent supporters, Corrigan earned his master’s and doctoral degrees from Fordham in economics. He spent 25 years working for the Federal Reserve before moving into the private sector, where he serves as chairman of Goldman Sachs Bank U.S.A.

“It will be 50 years this September that I started my training at Rose Hill in the economics department,” he said. “There is no doubt that my career was put forth in a very fundamental way in those years.”

The Hellers, proud parents of three Fordham graduates—Amy, FCLC ’03, Michaela, FCLC ’07, and Tim, GSB ’11—described themselves as Fordham “lifers” even though neither of them are graduates.

While their son Tim was a student at the Gabelli School of Business, the couple worked to develop the University’s first Parents’ Leadership Council, serving as its inaugural co-chairs and helping to recruit members from coast to coast. Today, the group boasts 70 members.
Attending Fordham, said John Heller, has taught their children how to think, how to care, and all about the true meaning of respect.

“We feel very fortunate to have become a part of this community,” he said. “We have always felt that we received more than we have given.”

The Chicago-based couple, the first parents to ever receive a Founder’s Award, said they have come to call New York City their “second home.”

“When we dropped Amy off 13 years ago and we heard the phrase ‘Fordham is our School and New York City is our Campus,’” said Patti Heller, “John and I did not realize they were talking to us. But like our children, our lives have been enriched and enlightened immeasurably.”

Referring to the fact that the Founder’s Dinner was happening just hours before the first Jesuit pope’s inaugural mass in Rome, Joseph M. McShane, S.J., president of Fordham, said that the convergence was completely appropriate because the evening’s three awardees had lived lives as if they’d“heeded the advice of St. Ignatius.”

“They have transformed the world in and through the action of their everyday lives,” he said.

“The pope’s election shines a new and luminous light on what we are about this evening,” said Father McShane. “Tonight we celebrate Francis by doing what we do, doing it well, and doing it with heart—great heart.”

Father McShane called attention to “the 4600 undergraduates who performed over a million hours of community service last year,” students who “chose to spend their spring breaks on Global Outreach projects,” and the “tireless work done by our faculty” to instill the transformative Fordham character in the men and women they teach.

“In the [pope’s] spotlight, I would argue that we shine—and shine in service.” 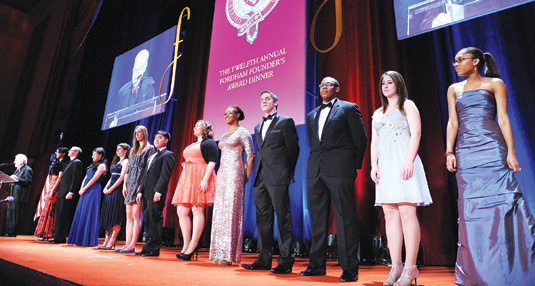 Twelve Presidential Scholars were honored at the Founder’s Day Awards Dinner on March 18. Courtney Markes, far right, spoke on behalf of the scholars.