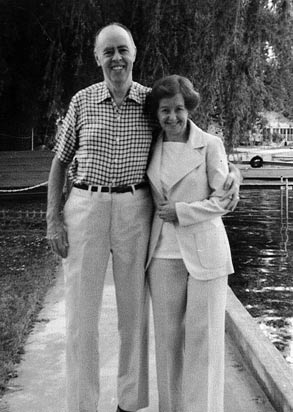 Owen T. and Alice M. Gorman in 1980.
Photo courtesy of the Gorman Foundation

The Gorman Foundation has announced it will donate $2 million to help fund a new Fordham Law building and establish the Owen T. Gorman Moot Courtroom. The family foundation, named for the late Alice M. and Owen T. Gorman, LAW ’29, is located in Sherrill, N.Y., and was established in January 2003 with a bequest from Alice M. Gorman.

“Owen grew up a poor Irish lad, and he always strove to do better, to be the best that he could,” said Joanne G. Larson, chair of the Gorman Foundation’s board of trustees, its treasurer, and niece of Owen and Alice Gorman. “He attended Catholic schools, and we would see pictures of him as a boy with all these medals he won—strings of them—he was always at the top of his class.”

Larson said Owen Gorman was very thankful to Fordham for the education he received, an education that enabled him to achieve considerable success. “One constant in his conversation was that Fordham did this for him, and Fordham did that for him,” Larson said. “He gave to Fordham while he was alive, but he always said, ‘I’m going to do better for them.’ And he did.”

Owen Gorman was a successful corporate tax attorney, with a client list that included Pepsi-Cola, Domino Sugar and the JCPenney Corporation. He worked out of his modest Queens, N.Y., apartment, where he lived with his wife until his death in 1999 at the age of 92.

The new building, part of the first phase of the Lincoln Center campus redevelopment, will be designed by architect Henry N. Cobb, a founding principal of Pei Cobb Freed & Partners. It will include ample clinic space, simulation rooms and common areas for students.

“We at Fordham Law are truly grateful for this remarkably generous gift establishing the Owen T. Gorman Moot Courtroom,” said William M. Treanor, dean of Fordham University School of Law. “With this gift and others like it, the school will create a new Fordham Law building with the most modern technology and ample space for collaboration and innovation—a law school well-equipped for legal education in the 21st century.”

Amanda Larson Gebhardt, daughter of Joanne G. Larson, is the foundation’s president. She is an alumna of Skidmore College, former public relations executive and serves on the boards of several nonprofit organizations, including the Oneida Healthcare Center, Skidmore College and Cazenovia College.

Prior to becoming the foundation’s founding chair, Joanne G. Larson was an educator at New Hartford Central School for more than 32 years. She received bachelor and master of science degrees from the State University of New York at Cortland.

“It was never my uncle’s intention to have his name on anything—to put himself out there,” Joanne Larson said. “That was [the foundation’s]decision. But I think he would be thrilled to know what we’ll accomplish with the donation.”