skip to main content
Return to Fordham University
You are at:Home»Inside Fordham»Former White Supremacist Details a Life Ruled by Hatred 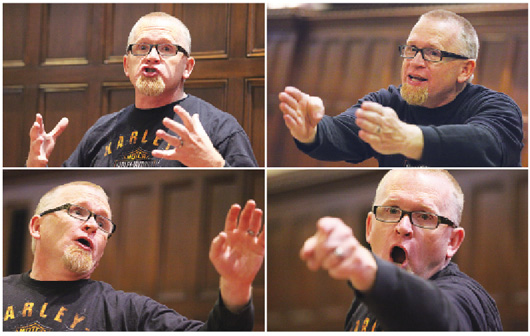 TJ Leyden, a former skinhead, gave a crash course on his life as a white separatist, and how and why he left the movement.
Photo by Michael Dames

TJ Leyden, a former neo-Nazi who spent nearly half his life as a recruiter and advocate for the white power
movement, told his story to rapt Fordham audiences on April 18 and 19.

It was as ugly a story as one could tell.

“I’m going to use words that will offend every one of you in this room many times,” he said. “This is necessary so that you can understand my mindset.”

Leyden, who made appearances on the Rose Hill and Lincoln Center campuses, gave the audience a crash course in the subculture of paranoia, fear, violence and loathing that fuels the white power movement in every state in the country.

From the map of a racially divided United States that was proposed in 1963, to the 1988 brawl between blacks and skinheads on Geraldo Rivera’s show that resulted in the host’s broken nose, he detailed the ebbs and flows of a movement that views blacks, Hispanics and Jews as genetically inferior.

And lest anyone mistake the phenomenon as one of the past, Leyden showed images of Nazi toys currently for sale; Ethnic Cleansing, a video game that has sold eight million copies; and songs for sale on iTunes like “Fire up the Ovens” and “Six Million More.”

He directed a great deal of ire toward the U.S. Armed Forces, where he noted that he was allowed to serve in the Marines while sporting numerous blatantly racist tattoos. A picture of a group of Marine Corps snipers stationed abroad holding a Nazi “SS” flag under the Stars and Stripes that he shared with the audience was taken a month ago.

Leyden placed himself firmly in the middle of the movement, and made clear just how hard it was to turn away from a way of life that had consumed him for 15 years. In the 18 months it took him to consider leaving to the day he did, he noted that he never told his wife, for fear of what his former friends would do if she told them.

They divorced, and he has joint custody of their two sons, who he said are still allowed to attend white supremacist rallies with their mother. It was their future that convinced him to have a change of heart, go to work with the Simon Wiesenthal Center to promote tolerance, and write Skinhead Confessions(Cedar Fort, 2008).

He cautioned against responding to acts of racism with hatred, noting that a white supremacists’ most potent weapon is paranoia and suspicion.

“This was our plan: ‘Let’s go to a junior high school or a middle school at night. Let’s put up any racial slur, lie or innuendo we could think of.’ Why? Because we knew the next day when the black, Hispanic and Asian students found this, who would they blame on campus for doing it? They’d blame a white student. ‘It was that white kid in gym class; I heard he was saying those racist statements last week,” he said.

“Now a certain segment of the black, Asian and Hispanic students take their racial fear and animosity and hatred and take it out on the white students that they perceive to be racist. They’ve actually become the very first tool in the white power movement.”

Although his story is hard to fathom for most people, Leyden cautioned that each of us is capable of passive acceptance of intolerance.

Leyden’s appearances were sponsored by the Fordham Office of Multicultural Affairs, Offices of Student Leadership and Community Development, and Offices of Residential Life at Rose Hill and Lincoln Center.