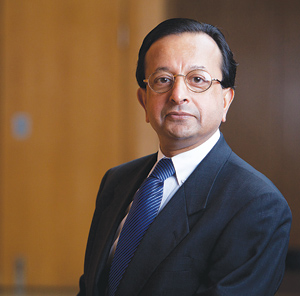 Long before heading to the United States to study business at Columbia University, Sris Chatterjee, Ph.D., was on the road to a career in mechanical engineering in his native India.

“Back in the 1960s, middle-class Indian families wanted their children—certainly their male children—to choose a career in engineering or medicine or law,” said Chatterjee, professor of finance in Fordham’s Schools of Business. “My elder brother was a role model for me. So, I tried to follow his footsteps by studying at the Indian Institute of Technology.”

Chatterjee graduated with a bachelor’s degree in engineering and worked at the Associated Cement Companies for four years before it became apparent that mechanical engineering wasn’t his passion.

“My experience convinced me that India’s problems had more to do with bad management than with bad or insufficient technology,” he said.

He returned to school to pursue a master’s degree in management at the Indian Institute of Management (IIM), and then came to Columbia University for his doctorate.

It was a professor at Columbia who inspired Chatterjee to pursue a degree in finance, though Chatterjee said he first became interested in the subject as a student at IIM (Calcutta): “It seemed more analytical, which fit with my engineering background.”

The true test, however, was when he faced a crossroads while he was attending Columbia: the chance to pursue a doctorate in finance or marketing.

“A famous [marketing]academic asked asked me to consider the opportunity of working with him. Alas, I did not know at that time the famous advice from Yogi Berra: when you come to a fork in the road, you should take it!” joked Chatterjee, an avid Yankees fan.

More than 20 years later, Chatterjee continues to progress in his career in finance and academia, most recently with a new appointment as associate dean for graduate business education.

On the heels of two consecutive terms as the area chair of finance and business economics—the maximum terms one faculty member can hold in the post—Chatterjee will now share the insights he has gained from that leadership to support the Graduate School of Business Administration (GBA) as it evolves to educate today’s global business leaders.

“I am grateful that Sris Chatterjee has agreed to take on the responsibilities of this newly created position,” said David Gautschi, Ph.D., dean of GBA, who selected Chatterjee for the role. “Sris brings a wealth of experience that he has gained after serving two terms as chair of the finance area of the business faculty.”

According to Gautschi, Chatterjee has been involved in program development and program management in GBA’s finance area, and was instrumental in launching the Master of Science in Global Finance with Peking University.

“He has been a leader in creating a climate within the schools that is conducive to faculty research. As associate dean for graduate business education, Sris will have general responsibility for the management of the expanding number of master’s programs at GBA. His knowledge of the school, its faculty, students, and curricula will be put to good use as GBA prepares for the five-year maintenance of accreditation review by the Association to Advance Collegiate Schools of Business.”

When Chatterjee arrived at Fordham in 1989, the business schools were in the midst of significant growth, as they are today. Now, the emphasis at GBA is on new specialized master’s programs—eight were introduced in the past year alone—and on recruiting new faculty.

The demand for an evolved MBA and new, specialized master’s programs is attributable in part, Chatterjee explains, to a declining number of jobs in the financial services sector. “There is a demand for market-ready MBA graduates who have a multiplicity of skills and who can work effectively in a globally diversified workplace.” An increasing emphasis on entrepreneurship and innovation also fuels the need.

Chatterjee looks forward to developing the curricula of the School’s MBA and MS programs. “In addition to the MBA program, we have 11 master’s degree programs in various management disciplines, and a few more are in the pipeline,” he said. “There are similarities among these programs, and differences. I think both Deans Gautschi and [Donna] Rapaccioli, [dean of the undergraduate Gabelli School of Business]felt that there should be someone to coordinate them. That’s mainly what my job will be.” Curriculum reform will be implemented, designed and configured by faculty, with Chatterjee hoping to “facilitate and help move the process forward.”

Chatterjee has been instrumental in several initiatives launched by GBA, including The Fordham Wall Street Council, established in 2010. This group was formed to foster collaboration among GBA alumni, faculty, students, and friends interested in the various sectors of finance and the capital markets.

His experience as area chair and his involvement with University activities, such as the Faculty Senate, Dean Search Committee and University Budget Committee have enabled Chatterjee to work closely with faculty and administration and learn more about the Fordham community, its values, and its mission—all of which will be useful in his new post.

“Fordham Schools of Business have really grown significantly, not just in terms of programs, but also in research productivity,” he said. “We can feel legitimately proud that we have moved to a higher gear here at GBA. But more can be done.”