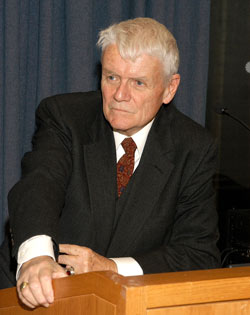 The story of Kevin O’Higgins, a founding father of the Irish Free State, had fallen into obscurity, overshadowed by the tales of fellow revolutionaries Michael Collins and Eamon de Valera. But a new book, launched in the United States at an Oct. 14 lecture at Fordham University, reveals the life and times of a man who not only consolidated critical institutions in the new state after the Anglo-Irish Treaty of 1921, but who would also come to be called the “Irish Mussolini.”

“Many who are aware of Kevin O’Higgins are moved by his story,” said the book’s author, John P. McCarthy, Ph.D., professor emeritus of history at Fordham and founder of the Institute of Irish Studies at the University. “O’Higgins’ main achievement was the solidifying of public institutions … where the gun and disorder were still rampant.”

Nearly 50 people attended the lecture, sponsored by the American Irish Historical Society and the University’s history department, and gained a deeper understanding of “one of the key figures in shaping modern Ireland,” according to Monsignor Thomas J. Shelley, Ph.D., professor of historical theology, who introduced McCarthy and his book,Kevin O’Higgins: Builder of the Irish State (Irish Academic Press, 2006).

“This book has all the hallmarks of his meticulous scholarship,” said Monsignor Shelley. “Although he’s retired, John is working harder than ever before.”

McCarthy provided a detailed biography of O’Higgins’ life, from his birth in 1892 to his imprisonment in 1918 for “provocative oratory on behalf of Sinn Fein candidates.” Educated at the Jesuit-run Clungowes Wood, he was a minister in Michael Collins’ government and emerged as vice president and minister for justice in the Irish Free State after Collins’ death.

It was in this role that O’Higgins faced a defining moral choice. In retaliation for the IRA campaign of assassination that led to at least 77 deaths, he went along with his colleagues’ decision to execute four republican prisoners. One of those executed at O’Higgins’ command had been the best man at his wedding.

“He did this to secure the welfare and safety of the Irish people,” said McCarthy. “I am sure it was a thing that plagued him for the rest of his life.”

The capital punishments were meant to ensure that no further assassinations would take place, but “they went against the basis of democratic thought,” and were condemned by the Archbishop of Dublin, said McCarthy.

This pivotal decision reveals much about the man, the times and the public’s general role in such state-sponsored executions. In its review of the work, Books Ireland wrote: “McCarthy has given us a thorough, well-argued book, one that is provocative in the best sense in that it moves us to think, not least about how we complacently leave life-and-death decisions to others in political life, forget what we owe them and how some of them have paid for our security with the highest price.”

Indeed, O’Higgins paid for Ireland’s security with his own life. “On July 10, 1927, he was wounded by three gunmen on his way to Mass and died later in his home,” said McCarthy. “O’Higgins’ death would be seen as a blood sacrifice that guaranteed Ireland to become democratic.”

Before his assassination, O’Higgins struggled with his fellow “conservative revolutionaries” to unify the country. “O’Higgins shared a prevailing nationalistic optimism for the unification of the island,” said McCarthy. “He understood that the unification … would only come with agreement from both parts. … His was the creative type of thinking … that characterized the 1998 Good Friday agreement.”

The Leinsterman was likewise known for his stern policies and strident legislative proposals aimed at protecting democracy. “The reform of intoxicating liquor legislation was another important issue for O’Higgins,” said McCarthy. “He advanced colorfully opposed legislation for uniform hours for the sale of liquor.” His experiment with an unarmed police force (that still stands) today is another noteworthy endeavor for which O’Higgins is remembered.

“Had O’Higgins survived … I think you would have developed a better context and rapport” between Northern Ireland and the Irish Republic, McCarthy said. “His leadership would have moved the way of thinking to a more reasonable way. Things would have moved much faster.”