Jumping Off a Cliff, Landing on Track 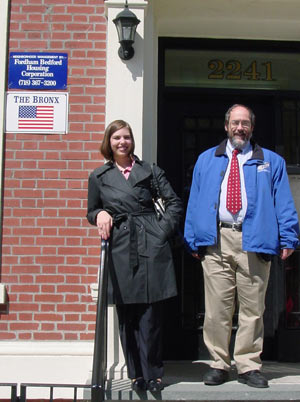 Angel Ventling was on a traditional career track. In 2001 she graduated from Indiana University with a business management degree and got a job at Enterprise Rent-A-Car in northwest Indiana.

She was making money. She was stable. And she was miserable, she said, because she had drifted from her career goals: doing something international with intrinsic value that would help other people.

“So I kind of jumped off this big huge precipice and joined the Peace Corps,” Ventling said. “My family thought I was crazy and my friends thought I was nuts.”

Three years after leaving Enterprise, Ventling, 27, is back on her track. She completed a 27-month stint in Paraguay with the Peace Corps and now is entering her final semester as the first Peace Corps fellow through Fordham’s graduate program in International Political Economy and Development (IPED).

“I think a lot of people come out of college fresh and full of good ideas and with a lot of potential and some of that potential gets lost because they lose their original focus and get sucked into that whole web of making money,” Ventling said. “That precipitated my jumping off a cliff and doing a complete 180 and putting myself out there and doing something I’d never done before—an act of desperation—and it worked.”

In May 2003, Ventling went to Paraguay with the Peace Corps.

She said she likes her creature comforts. Moving to an impoverished area didn’t bring her fear, she said, but a certain amount of “Oh-my-gosh-what-am-I-getting-myself-into?”

But she adapted. She already spoke Spanish, and with other Peace Corps volunteers, learned enough of the native Guarani language to get by.

She helped a woman finish building her home in exchange for a room there.

In the countryside outside Coronel Oviedo, she worked on several projects in rural economic development.

At a bakery, she helped women organize marketing campaigns. On a pig farm, she helped members write by-laws, develop an accounting system and plan the division of labor. She taught sex-education workshops to youth. She taught English. She directed a project to bring the Internet to local students.

And much of the time she failed.

“A lot of people go in and think they’re going to make concrete changes, but the reality of it is it’s not measurable the impact that you have,” Ventling said. “The impact might be more in your one-on-one daily contact. It’s certainly not in the accomplishments that you have with your official job, (but) more in the individuals that you touch.”

At the pig farm, someone broke into the treasurer’s box after many members had already quit. At an agricultural cooperative, she had to hire messengers to track down people who had taken out loans and then disappeared.

The bakery wasn’t making any money. Ventling was doing her best to assist the owners, but wondered why they were so slow to act. Finally at a meeting, she remembered the vice president saying, “Angel, we are waiting for you to tell us what to do.”

Some have reverse culture shock when re-entering the United States from living abroad. Ventling didn’t have the time. She left Paraguay in August 2005 and began studies at Fordham three weeks later.

Ventling had been accepted to international studies programs at eight universities. In choosing Fordham, she became the first Peace Corps fellow in the IPED program. Through the fellowship, she received a full-tuition scholarship from Fordham and a grant from the federal government for working 15 hours a week at the University’s Neighborhood Housing program.

“Our role is to help them make that transition from their Peace Corps service to a professional career,” said Henry Schwalbenberg, Ph.D., associate professor of economics, director of IPED and coordinator of the fellows program. “In today’s world from a career perspective, we need to prepare people for jobs that have international dimensions.”

The Peace Corps had contacted Schwalbenberg in the spring of 2004 about starting the program. The initial Peace Corps Fellows/U.S.A. program began in 1985 at Columbia University’s Teachers College. The program works to fulfill the Peace Corps’ mission of helping Americans better understand other peoples.

Cary Ballou, director of Peace Corps Fellows/U.S.A., said about 4,000 people have completed the program, which is now at almost 50 universities. Last year, a record 351 enrolled as Peace Corps fellows.

Ballou said about 50 percent of Peace Corps volunteers want to go to graduate school within five years of returning from their projects.

“I will recruit anyone I can to go to IPED,” Ventling said. “I love it and I rave about it.”

She said administrators do a good job of building a small community and are concerned in seeing a student through to a job. She said the students are a good mix of national and international students with varied backgrounds.

Last year the fellows program helped attract two to three times as many Peace Corps veterans to enroll in IPED than usual, according to Schwalbenberg. This year, another student begins the second fellowship, and Schwalbenberg said he hopes to be able to start two fellows in the fall of 2007. 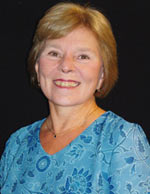 Working at an internship in a high needs community is a requirement for Peace Corps Fellows/U.S.A. to come to a university. In Ventling’s work at the University Neighborhood Housing program, she wrote grants, researched and analyzed why property prices are rising in the Bronx, and conducted econometric studies. In June, she married Alicio Arrua, a man she met in Paraguay. Ventling plans to graduate after this semester and plans to become a foreign service officer with the U.S. State Department.

Ventling said what excites her about IPED is the chance to study in the classroom what she encountered in Paraguay. “I as an individual learned so much, changed so much,” she said of her time abroad. “I now have definite opinions about development work, about what is sustainability, about the meaning of poverty, and also why do poor countries stay poor after 50 years of richer countries trying to help them. Is it their own fault or is it the Western world’s fault? It’s a very complicated issue.” 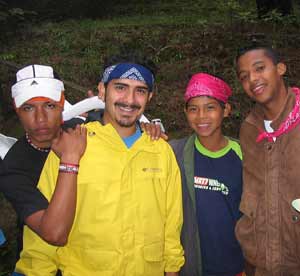 Undergraduate: Graduated in 1999 from Stanford University with a degree in political science, a concentration in international relations, and a focus on Latin America.

Employment: After graduation, Romero and friends started college411.com, a startup that was acquired by Student Advantage.

The Peace Corps: Worked from 2003 until 2005 in Costa Rica as a youth development volunteer in a semi rural community. There, he started a soccer team, gave workshops on sexual education and self-esteem to youth, built a fence around an elementary school and founded a nationwide boys’ camp.

Why the Peace Corps?: “More than anything it’s given me a real world perspective on what it is to be part of the culture of poverty and what it is to live outside the United States.”

Plans after Fordham: Work in youth development in Latin America. “A lot of people don’t focus on youth development,” Romero said. “It’s an issue that’s sort of ignored for the most part and I want to change that.”