skip to main content
Return to Fordham University
You are at:Home»Inside Fordham»Fordham’s Most Loyal Celebrated at Convocation

With the threat of yet another snowstorm bearing down on New York City, Joseph M. McShane, S.J., president of Fordham, was reminded once again of the many unsung heroes it takes to run the University.

“During this snow-laden year, I have heard them working through the night to clear the paths around the campuses,” he said.

Father McShane made the remarks on March 2 at the 2014 convocation honoring the University’s longstanding employees. Fourteen members of the faculty received the Bene Merenti medal for 20 or 40 years of teaching service. Ten administrators and staff received the Archbishop Hughes medal for 20 or 40 years of service. And three employees received the Sursum Corda award for outstanding contributions to the life and mission of the University. 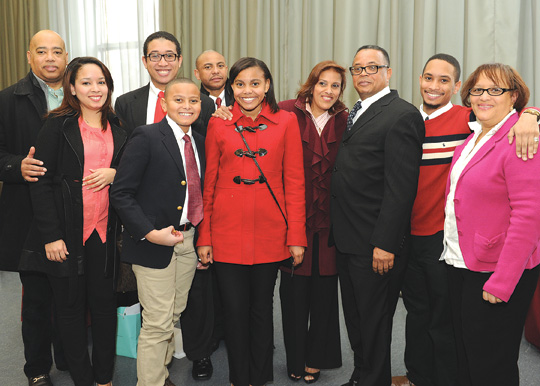 Sursum Corda winner Carlos Beltre, third from from right, with his family.
Photos by Chris Taggart

It’s quite possible that, over the years, Beltre has been a member of one of the crews Father McShane heard working through the night, having begun his time at Rose Hill as a part-time weekend cleaner. Beltre, who emigrated from the Dominican Republic, eventually advanced to lead the McMahon custodial crew at Lincoln Center—all while pursing his bachelor’s degree in the evening. He said that working at Fordham not only changed the direction of his life, but that of his children’s lives as well. 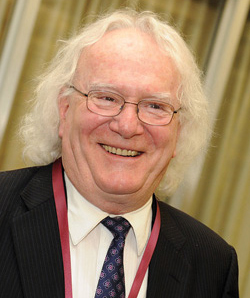 “It changed my family completely,” said Beltre. “The vision that Fordham has of education? I can pass that to my kids and all of my family. That I appreciate a lot.”

Beltre’s son, Carlos Beltre Jr., is a junior at St. John’s University and said he hopes to continue on to get his doctorate degree in psychology.

James J. Hennessy, Ph.D., dean of the Graduate School of Education and recipient of the 40-year Bene Merenti medal, said that he too has been changed by Fordham.
“It’s aged me considerably,” he smiled.

Conversely, WFUV Program Director Rita Houston, winner of the 20-year Archbishop Hughes medal, said that being at the University has kept her young. 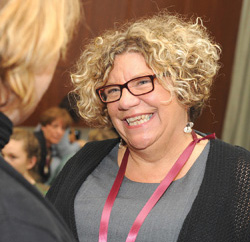 Houston said that while she always wanted to work in radio, working at WFUV, the noncommercial, member-supported station at Fordham, vastly changed the course of her career—more than if she’d settled on a commercial station. She said that the nonprofit nature allowed for a better focus on the listener, raising the level of artists presented. And then there are the students, she said.

“Working here keeps you young,” she said. “Being surrounded by young people every day really keeps you hip and so much more ahead of the curve in terms of technology. That’s been a big part of WFUV’s success.”

Father McShane asked the award winners to face the crowd of family, friends, and co-workers, and he then proclaimed them “our heroes.”

Richard F. Gyug | Professor of History and Medieval Studies | Fordham College at Rose Hill and the Graduate School of Arts and Sciences