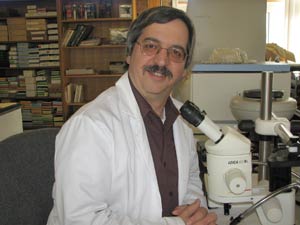 The Louis Calder Center, Fordham’s biological field station in Armonk, N.Y., has entered into a five-year contract with New York state to act as its Regional Medical Entomology Laboratory for nine counties in New York’s metropolitan region, the most populous region of the state.

The contract, which will run through 2011, designates the Calder Center as one of the state’s focal points for vector-borne disease research and related public health issues. It will cover Sullivan, Ulster, Duchess, Putnam, Orange, Rockland and Westchester counties and parts of Long Island. Previously, the region’s entomology laboratories had been located at Cornell University in Ithaca and Sullivan County Community College, part of the State University of New York system in Loch Sheldrake, N.Y.

Under the contract, the Calder Center will monitor local populations of ticks and mosquitoes; research ways to detect and control the risks of diseases these insects carry; collaborate with local departments of health in all nine counties with regard to such diseases; and be ready to respond to public outbreaks of vector-borne diseases such as the West Nile virus. The contract will pay the salaries for researchers and technicians to work side-by-side with those in the Calder Center’s well-established Vector Ecology Laboratory (VEL).

Richard Falco, Ph.D., associate research scientist and co-director of the VEL, will act as the state’s metropolitan regional medical entomologist.

“Given our experienced personnel, the strong commitment by Fordham in supporting this kind of work and our location in a suburban, populated habitat where mosquitoes and ticks proliferate, it was a natural place for the state to choose,” Falco said.

The contract comes on the heels of the Calder Center’s receipt of a $388,000 grant from the National Institutes of Health to study fungi that can kill the black-legged tick, one of the major transmitters of Lyme disease. That grant was awarded to Falco, VEL co-director and associate research scientist Thomas Daniels, Ph.D., and Amy Tuininga, Ph.D., associate professor of biology.

Nancy Busch, Ph.D., dean of the Graduate School of Arts and Sciences (GSAS) said the state has recognized the “quality work done by the staff of the VEL for many years.

“The contract demonstrates the positive benefits of Fordham’s commitment to basic scientific research and applications—both prevention and intervention,” she added.

According to Dennis J. White, Ph.D., director of the Arthropod-Borne Disease Program at the New York state Department of Health, some 5,000 cases of Lyme disease occur in New York state each year, focused primarily in the counties of Ulster, Sullivan and Duchess, as well as all points south. In addition to doing research, White said Falco will assist those local health departments in research, education efforts and monitoring.

“The state doesn’t have experts of his stature available locally,” White said. “Whether it’s a crisis or just teaching, Rich will be there as a resource for them.”