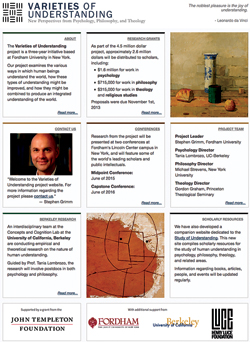 Stephen R. Grimm, Ph.D., an associate professor of philosophy who last year received a $3.56 million grant from the John Templeton Foundation, has received $640,000 in supplemental funds from the foundation, raising his overall award to $4.2 million.

Grimm’s award, the largest that Fordham University has ever received in the humanities, funds his interdisciplinary project, “Varieties of Understanding: New Perspectives from Psychology, Philosophy, and Theology.” Launched in July 2013, the three-year endeavor sponsors research in these three fields into the various ways in which human beings understand the world.

The project is using the grant, in part, to distribute approximately $2.6 million in sub-awards to fund new research on the psychology, philosophy, and theology of understanding.

“Our goal was to receive at least 100 [proposals]in both philosophy and psychology, and at least 50 in theology,” said Grimm, a philosopher who specializes in epistemology.

In fact, the team received nearly 400 proposals altogether, 20 of which were selected to receive awards.

“The quality of the proposals was remarkable,” Grimm said. “We had applications from both world-renowned senior figures and up-and-coming younger scholars.”

Tania Lombrozo, Ph.D., associate professor of psychology at the University of California, Berkeley; Michael Strevens, Ph.D., professor of philosophy at New York University; and Gordon Graham, Ph.D., the Henry Luce III Professor of Philosophy and the Arts at Princeton Theological Seminary directed the distribution of awards for psychology, philosophy, and theology, respectively.

As part of the project, Lombrozo will also direct empirical and theoretical research out of her Concepts and Cognition Lab at the University of California, Berkeley, on the nature of human understanding.

The grant will also fund two conferences over the course of the three years. In June of 2015, a midpoint conference will take place at Fordham’s Lincoln Center campus. At this conference, the award recipients will present their research.

In June of 2016, a capstone conference will also take place at the Lincoln Center campus, at which point scholars will present their final research results. In addition, leading scholars and public intellectuals in the fields of psychology, philosophy, and theology will present their own views on the nature of understanding in light of the new research presented at the midpoint conference.

Bringing these disciplines together in conversation, Grimm said, can help to provide a better understanding of human understanding itself.

“We hope that relationships will be formed among [the scholars]so that interdisciplinary projects will continue,” Grimm said. “I’m optimistic that bringing together psychologists, philosophers, and theologians will make some progress. But I think only a big venture like this has the promise of doing so.”

More information about the initiative can be found at the project’s website:
www.varietiesofunderstanding.com.