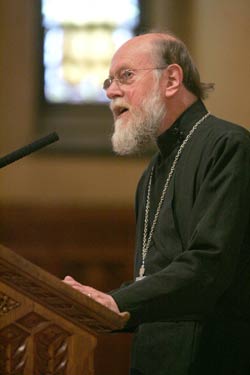 A three-day conference, “Orthodox Readings of Augustine,” gathered together international Eastern Orthodox, Roman Catholic and Protestant theologians and historians to explore the theology of St. Augustine of Hippo, one of the most important figures in the development of Western Christianity, at Fordham University in June.

Although regarded as a saint in the Orthodox Church, St. Augustine has remained a controversial figure for a number of reasons, including his teachings about original sin, predestination and the Holy Trinity. Roman Catholicism, on the other hand, considers the fourth-century theologian to be a “church father.” The conference, which was held on the Rose Hill campus from June 14 to 16, marked the inaugural international conference of Fordham’s Orthodoxy in America Lecture Series.

“Augustine is typically identified as the source of all things that Eastern theologians dislike about Catholic theology,” said George Demacopoulos, Ph.D., assistant professor of historical theology who co-organized the conference with Aristotle Papanikolaou, Ph.D., associate professor of theology. “We gathered together top-tier international scholars, those most qualified to comment on the works of St. Augustine, to explore the extent to which his works should be viewed as a bridge between East and West, rather than a wedge.”

In conjunction with the conference, Fordham confered an honorary doctorate of human letters, honoris causa, on His Eminence Archbishop Demetrios, the primate of the Greek Orthodox Church in America. The conferring of the degree came on the occasion of the archbishop’s 40th anniversary of his elevation to the episcopacy.

Rev. Andrew Louth, Ph.D., professor of patristic and Byzantine studies at Durham University in England and an Orthodox theologian, delivered the conference’s keynote address and told the gathering that both Eastern and Western theologians make the mistake of reading St. Augustine’s works in the context of subsequent theology. Louth said that the examination of St. Augustine’s homilies on the psalms reveals a pastoral concern for, and psychological insight, into the darkness of the human condition that is expressed very similarly in early homilies of an Orthodox spirituality, such as the Macarian homilies (fourth century anonymous Orthodox writings that helped shape Eastern Christian spirituality.)

“If you can simply listen to Augustine himself, the preacher and the pastor, I think Christians of both the West and East will find themselves in the presence of a father of the Church, whose voice we can still hear,” he said. “Here, [in the psalms]we find the heart of Augustine, a heart in pilgrimage.”

Demacopoulos also announced that Fordham will offer the nation’s first undergraduate minor in Orthodox Christian studies starting with the fall semester at the Rose Hill campus. The minor will be offered at the Lincoln Center campus in 2008. The interdisciplinary minor will consist of two required courses, “Byzantine Christianity” and “Orthodox Christian Ethics,” and four electives from among several departments. Demacopoulos and Papanikolaou will co-direct the program.

Co-sponsors of the conference included the Kallinikeion Foundation, the Augustinian Institute of Villanova University, and Fordham’s Office of the President, Office of the Vice President for Mission and Ministry, the dean of faculty, deans of the Graduate School of Arts and Sciences, Fordham College at Rose Hill, Fordham College at Lincoln Center, the Center for Medieval Studies and the Department of Theology.