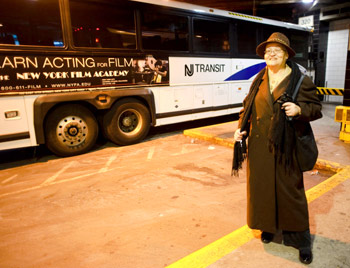 While most of us are still slugabed, savoring the last of our night’s slumber, some Fordham employees are downing the last of their coffee and heading for the door.

They leave the house in darkness, before most of us hit the snooze button.

They walk through the campus gates the same time that you and I do.

They are Fordham’s extreme commuters—employees who spend four or more hours a day commuting to and from campus. On average, each spends approximately a month each year traveling to and from work.

And they are not alone. Such extreme travel times are on the rise nationwide, according to the United States Census Bureau.

Put off by the high price of real estate in New York and the emotional devastation of 9/11, Fredrica Patterson, a 22-year employee, found sanity and affordability in Ocean County, N.J., where she moved in 2001. Manchester Township is a quiet hamlet west of Toms River that has few streetlights, plenty of pine scrubs and wildlife—deer, raccoons and more, Patterson said.

It is also 80 miles from Lincoln Center.

To reach her desk at Quinn Library on time, Patterson rises before 5:30 a.m. to get ready and drives 20 minutes to a park ‘n’ ride in Toms River. There, she catches the 6:30 a.m. bus into Manhattan.

“I’m a Brooklyn girl,” Patterson said. “After traveling by subway, I wasn’t used to buses and traffic. It took some adjustment.”

“On those days, it’s two hours on the bus,” she said. “I go to sleep. That’s the best thing to do. That’s one thing about New Jersey Transit, it’s very comfortable.”

“For me, it’s genuine work time,” said Hassett, the director of graduate studies. “With only one stop between Princeton and Manhattan, I am virtually uninterrupted. No phone calls. No way to go out for a cup of coffee. I’ve built pedagogy around the fact that I am always carrying student papers to read.”

A member of the Fordham faculty for 30 years, Hassett said her Central Jersey location was chosen by “drawing compass circles” on a map to find a place that was equidistant between her office and her husband’s. (He works at another university, in the opposite direction.)

“You make a decision to be at a certain place and you make a life around it,” she said. “I don’t mind the commute. I’ve made it absorbing.”

Those who travel by car don’t have to negotiate a mass transit schedule, but there is definitely less down time when the road requires your concentration. James Ciaccio, Ph.D., professor of chemistry and associate department chair, commutes four times a week from the New Haven, Conn., area. To save a half-hour, he drives rather than taking mass transit. Total travel time: two hours each way.

“I’m an audio book addict,” said Ciaccio, who has worked at Fordham for nearly two decades, “or else I listen to CDs or the radio. If I need to calm down, I listen to jazz. To stay awake, I listen to the Ramones.”

Thomas Walsh, FCRH ’07, a Fordham IT technical support specialist, is part of a family of commuters who drive daily from Fishkill, N.Y. to Rose Hill. From there, his mom, Jean, goes to her job at the William D. Walsh Family Library, while he walks to the Grand Concourse and gets the D train to his job at the Lincoln Center campus. Sometimes his father, Tom Sr., a facilities engineering department manager, joins him.

Some days, the family’s schedules vary too greatly to travel together.

“It often becomes a ‘custom’ commute,” said Walsh, whose travel time averages two hours each way. “There are times when my mother is ready to go home at 4:30 p.m., my dad is ready at 5 p.m., but I’m stuck until 8 p.m. We try to keep it to one car, but we each have our own cars and there are times when all of us are making the same trip. Some people would call us crazy.”

All of the extreme commuters have pondered their sacrifice in travel time, but the realities of 21st century life prevail.

“I like the benefits, I love the atmosphere, and I enjoy working around young people,” Patterson said. “Loving your job—that’s important, you know.”

Walsh concurred. “If I worked somewhere that I had no pride in, I wouldn’t be as motivated to do the commute. But I am a Fordham alumnus and I love my school.”

Ciaccio tolerates the long ride because he and his family love New Haven.
“
We wanted to settle where we could get involved in community activities,” he said. “Now, we are very anchored here.”

And then there is the question of biorhythms. These commuters leave their homes in darkness, and it is dark when they return. In fact, Patterson arrives home so long past dinnertime that she eats a “late lunch” instead and settles for alight bedtime snack.

Hassett said her commute keeps her tuned in to the weather as well as the seasonal changes in light.

And Walsh has developed a special appreciation of weekends in his “quiet suburban home.”

“Seeing the Hudson Valley in daylight, with rolling hills and woods just a stone’s throw away, makes me appreciate it all the more,” he said.