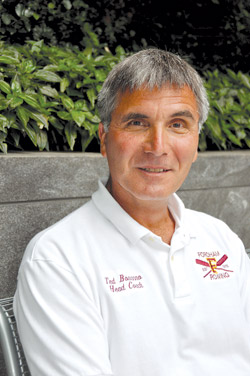 WHAT HE DOES
Ted is the main motivator in preparing Fordham’s crew teams for prestigious collegiate championships, including the Head of the Charles and Dad Vail Regatta.

BACKGROUND
Ted graduated from Monsignor Scanlan High School in the Bronx and received a bachelor’s degree in biology from Marietta College in Ohio. He coached crew at Rutgers and Columbia before coming to Fordham more than 20 years ago. He has coached internationally for several Olympic teams, including India’s team in 2000.

WHY FORDHAM?
“I’ve coached all kinds of programs in different environments, and sometimes it’s like pulling teeth to get students to do the work. At Fordham, that’s never been the case. When the students make a commitment to the crew team, they become very dedicated to the sport, their teammates and the program.”

HANDS-OFF COACHING
“Coaching rowing is very different than football, basketball and baseball because the coach has no interaction with the team during the race. Once the race starts, the crew can essentially do whatever it wants to. Essentially, though, the crew is going to follow the instructions that the coach has given them.”

IMMEDIATE RESULTS
“When they started running timed races, like the Head of the Charles, 46 years ago, sometimes teams wouldn’t find out how they did until the next day. Now, because sophisticated computer systems are doing the timing, the official results are available as soon as the last crew crosses the finish line. They even have the results as the race is in progress.”

HEAD OF THE CHARLES
“The Head of the Charles is a very prestigious regatta. It is a very different type of race in that it’s a time trial. Each crew starts about 10 seconds apart and, depending on the event, there could be 60 boats running at once. Despite slow conditions, the men’s team won the 2009 championship for the first time in Fordham history. We also were the only crew from more than 1,000 to break a course record.”

UNDERDOG ROWERS
“One of my most memorable moments was when one of my women’s teams went to Cincinnati and rowed for the national championship. Because we were a club team competing with varsity teams, we weren’t seen as competitive. But that year we won the championship. We beat a very good Harvard team and broke the course record.”

OUTSIDE ACTIVITIES
“I like to exercise, including biking and swimming. When I retired from rowing competition, I continued to row in master’s rowing, which is for older rowers, but now I only partake occasionally. My wife and I have two dogs; one is only four months old, so we’ve been giving her the attention she needs at this stage of her development.”