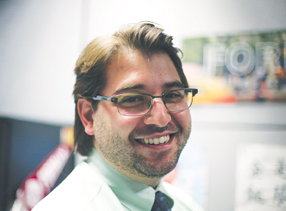 WHO HE IS: Assistant Director for International Admissions

WHAT HE DOES: “I travel to cities across the world and either attend college fairs or schedule meetings with guidance counselors to meet with groups of students. I was recently in three cities in Brazil; Santiago, Chile; Panama City, Panama, and finished up in San Jose, Costa Rica.”

BACKGROUND: A native of Lynbrook, Long Island, DelVecchio graduated from the University of North Carolina at Chapel Hill, and worked for three years for Adelphi University before joining Fordham one year ago, taking a newly created position.

HOW HE GOT INTO ADMISSIONS: “The college search process was very important to me. I had a tie to that experience, and when I graduated with degrees in sociology and Spanish, I found I didn’t exactly have a direct career path. I wanted to stay in a college environment and work with students, so I kind of fell into the admissions job and fell in love with it. I found a niche even further when I discovered international admissions.”

WHY INTERNATIONAL: “I like the notion of coming from a different culture and a varying population—like, ‘Wow, you’re interested in leaving your home country and starting this whole adventure. I’m happy to be there and discuss it and talk it through.’ I enjoy showing students and families from other cultures what doors can be opened to them.”

WHO’S COMING TO FORDHAM: “We’re welcoming about 5 to 6 percent overall of international students within each class. That’s between 90 to 100 students per year. This years’ class was 1,900, so it was about 5 percent. They’re coming from India, China, South Korea, Taiwan, Canada, the Philippines, and more. We have some pretty solid relationships around the world.”

MOST MEMORABLE TRAVEL EXPERIENCE: “I went to India for the first time in 2012, and arrived in New Delhi at 10 or 11 p.m. I got a car to pick me up so I could get back to my hotel room safely, and we’re driving down a highway fast, because that’s the way they drive, and there’s a big object clearly in front of us, but at a distance. Sure enough, as we get closer and closer and closer, we come up right behind it, and it’s a large elephant walking in the left lane down the highway carrying a few crates!”

NOT ALWAYS FUN AND GAMES: “I was recently in was São Paolo, and people say ‘How was São Paolo?’ and I say ‘I don’t know. It’s a city of 23 million people, and I was in and out in 36 to 48 hours, and mostly in schools and hotel rooms.’ It’s better than not going, but it’s not always full of the luxuries that people imagine.”