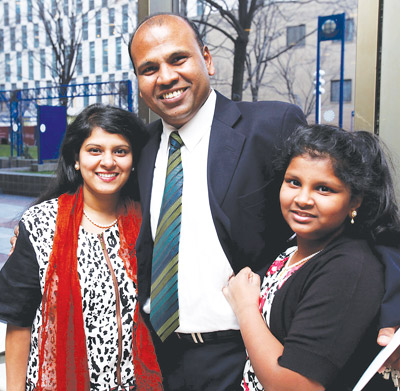 Paul Thyagaraj, manager of custodial services and facilities management, with his wife, Tryphosa (left), and daughter, Tayphath, after receiving his Sursum Corda award at the 2013 University Convocation on March 3.
Photo by Bruce Gilbert

Who He Is
Manager of Custodial Services for Lincoln Center

What Brought Him to Fordham
Thyagaraj started in 1989 as site foreman for a private company that ran the security at Lincoln Center. Then, in 1996, he was offered a position as night custodial supervisor for Fordham. Two years later, he was promoted to custodial manager at the Lincoln Center campus.

His Favorite Part of the Job
“My favorite part of the job is when the kids come on move-in day. We’re there helping them with moving in, telling them where everything is, where they can get their IDs, where the lounges are, etc. And we greet the parents who come to drop off their kids. We want to make them feel comfortable, like this is home.”

What Keeps His Spirits Up
“I love the people at Fordham. Our staff is excellent, very professional, which makes my life a lot easier. I tell them one thing: Respect. You have to respect one another, never look down on anybody. That’s very important.”

His Favorite Spot on Campus
“The 12th-floor Lounge/Corrigan Conference Center was renovated a few years ago. I like going up to that lounge and the President’s Dining Room when the guys are done with setups. Those are my favorite places on campus, and they show the kind of work we do.”

Snow Day? No Such Thing
On days that are “snow days” for the University, Thyagaraj and his team work extra hard. During the most recent snowstorm, which closed Fordham for two days, Thyagaraj stayed on campus overnight to make sure that the snow cleanup went according to plan. That included making sure the equipment was working, that all needed staff were on hand, that all the emergency exits were clear, and that the fire hydrants and sidewalks were visible.

What Makes Him Proud
At the 2013 University Convocation on March 3, Thyagaraj was one of three Fordham employees to receive the Sursum Corda award, which recognizes staff members who have made outstanding contributions to the life and mission of the University. His wife, who received her bachelor’s and master’s degrees from Fordham, and his 10-year-old daughter were in the audience to watch him receive his award. “I’m a Fordham guy,” he said. “I couldn’t see myself working anywhere else.”