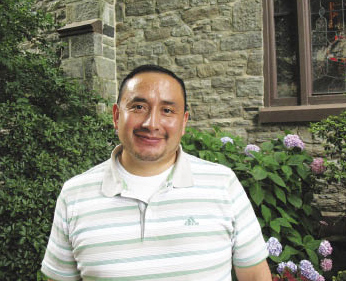 Who He Is
Coordinator of Liturgy, Resident Minister, Office of Campus Ministry

What He Does
Pena is responsible for organizing Catholic worship services at Rose Hill. His office schedules priests for major and minor liturgies. He oversees faculty, administrative and student “liturgical ministers” who help to organize the bringing of gifts (bread and wine), coordinate liturgies, broadcast Mass live on WFUV-FM, webcast liturgical services and distribute the Eucharist, among other tasks. He also oversees sacristans who set up for Mass and clean up the church and chapel afterward.

Many Hats
“I am a lay minister. While my main priority is to serve as a liturgical coordinator, I also act as a vocation promoter and spiritual counselor in the Office of Campus Ministry and as a resident minister in Queen’s Court. I live on-site and provide spiritual guidance to students who request assistance with their spiritual journey.

“Students—especially freshmen—enter into a vulnerable stage of assimilation and adaptation when they come to Fordham. New students and those who already are familiar with Fordham want to explore, to build their own personality. At the same time they are questioning their faith or reinforcing what they have learned from their families. As a campus minister, I am available as a source of support and companionship. I meet them where they are and help them to discern their vocation (whatever it might be) and to use their talents in the service of others.”

Building Community
“I am going into my sixth year at Fordham. I started the ministry with about 90 students and now we have 180 liturgical ministers. We have opened new ministries of service in the Mass. We have also developed a liturgy board—a select number of students who want to give special time to help organize Masses. We recruit, build community and find weekends to do service in the Bronx.

“We also offer vocational counseling. Instead of focusing on worship, we focus on the person as an individual. I offer my time and a space to meet with students who may be thinking of becoming a priest or sister. We facilitate meaningful conversations by bringing in speakers to talk about how they became the people they are so students can model them.”

Background
Pena grew up in Cuenca, Ecuador, as one of seven children. He left his village at 17 to study philosophy at Pontifical Catholic University. He then received a scholarship to study at Saint Thomas Aquinas University and at Gregorian University in Rome before coming to the United States. While earning a bachelor’s of science degree at St. Francis College in Brooklyn, he discovered his calling—to work with non-English-speaking Latin American populations as a pre-kindergarten teacher.

About Fordham
“Fordham workers are responsible for preparing people for the future, and that is where I fit in. Fordham’s mission is to prepare students for leading positions. By leading positions I also mean spiritual positions. The world is in desperate need of mentors and leaders who can make a positive difference in our society. It is my responsibility to help Fordham seek those mentors and leaders, and what better way than how the Jesuits are doing it, for the greater glory of God?”

Hobbies
Pena loves to play classical guitar, especially the music from Ecuador. “I never want to forget my roots,” he said.