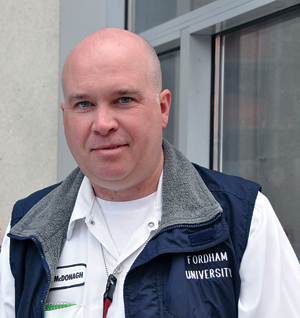 John oversees a facilities team and ensures that all operations aspects of the Lincoln Center buildings—the law school, McMahon Hall, and Lowenstein—are running safely and efficiently. In March 2012, John received the Sursum Corda Award for his outstanding contributions to the university.

After starting out at the Board of Education at the age of sixteen, John worked in facilities at several public schools, including Roosevelt High School, P.S. 175, and P.S. 85. He later attended trade school for technical training in engineering and became licensed in several regions—New York City, White Plains, N.Y., and Stamford, Conn. Upon receiving his engineering license, John worked at a commercial real estate company for 13 years, and at an electrical company, before finally coming to Fordham. He started as a first class mechanic, was promoted to engineer, and is now a foreman of Facilities Operations.

The Next Step Up

“My father was a carpenter and built houses. My parents said to me, ‘You’d be a great carpenter, but we think you’d be even better with the next step up.’ That’s what I went to school for—drafting engineering and mechanical engineering. I had a knack for it and everything fell into place.”

What You Don’t See

“A lot of what we do is behind the scenes. We make sure that things such as air conditioning, heating, pumps, and light safety, are all up and running. The better we do our jobs, the less you see of us. We are on site around the clock—day shifts, night shifts, weekends, and holidays. We’re always here.”

You Build It, We Run It

“There is a lot that goes into running a facility, especially one as large as Fordham. In the three buildings that we oversee, we make sure that every aspect of the facility is overseen and running smoothly. The main purpose of a university is to educate, so we often have to work around the University’s schedule. Four times a year, we check the systems, change filters, replace coils, and basically prepare the facilities for seasonal changes. Currently we are involved with the new dorms being built in the new Law School. We are asked for our input because after they are built, we will be the ones running the building facilities.”

“Even though it’s a large university, the faculty, staff, and students are all very personable. We speak with faculty members constantly to address any issues or concerns. My crew is also fantastic, and I wouldn’t be where I am today without the help of Peter Bundock, the assistant vice president of Facilities Operations, and Jedd Applebaum, the chief engineer and assistant director of Facilities Operations.”

On a Personal Note

His biggest joys are his wife, Maura, and two girls, Caitlin and Meghan, who are three and two years old.